Worst mass killin­g in two decade­s in a countr­y with one of the world’s lowest crime rates
By Reuters
Published: July 21, 2019
Tweet Email 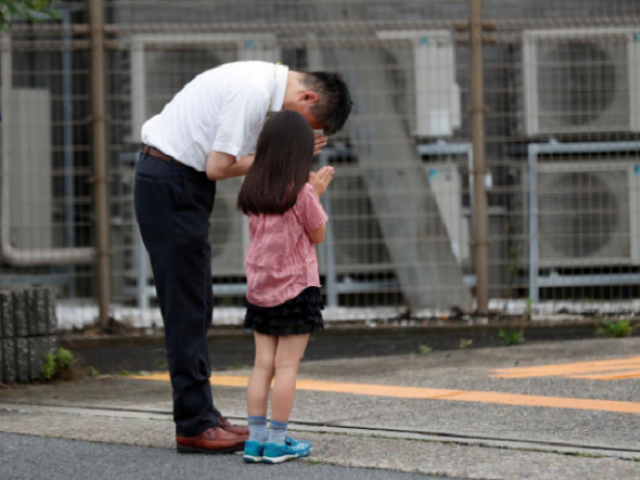 Father and daughter mourning the loss of victims in the Japan attack. PHOTO: Reuters

KYOTO, JAPAN: Many victims of an arson attack on a Japanese animation studio were young with bright futures, some joining only in April, the shaken company president said on Saturday, as the death toll climbed to 34.

Thursday’s attack on Kyoto Animation, well known for its television series and movies, was the worst mass killing in two decades in a country with one of the world’s lowest crime rates.

It was all the more poignant because of the young age of many of the victims when Japan has one of the world’s oldest populations.

Many of the victims were young women, company president Hideaki Hatta said.

“Some of them joined us just in April. And on the eighth of July, I gave them a small, but their first, bonus,” he said.

“People who had a promising future lost their lives. I don’t know what to say. Rather than feeling anger, I just don’t have words,” Hatta said.

Fifteen of the dead were in their 20s and 11 were in their 30s, public broadcaster NHK said. Six were in their 40s and one was at least 60. The age of the latest victim, a man who died in hospital, was not known and names have not yet been disclosed.

Authorities on Saturday issued an arrest warrant for 41-year-old Shinji Aoba on suspicion of arson and murder, NHK said.

Police have confirmed Aoba’s identity and said he was previously convicted of robbing a shop. They plan to arrest him once he recovers from heavy burns, NHK said. He was earlier airlifted to a university hospital in nearby Osaka.

Aoba went to the studio on Thursday morning, poured fuel around the entrance and shouted ‘die’ as he set the building ablaze, according to NHK.

He told police he had done it because the studio had plagiarized his novel, Kyodo news reported. Hatta said he had not seen any correspondence from the suspect and had no idea of the plagiarism claim.

One employee who survived the fire told NHK he did so by jumping from the second-floor balcony.

The employee, who was not identified, told the broadcaster there was a loud explosion and a plume of black smoke came up through a spiral staircase, filling the second floor and making it hard to breathe. As he went to the veranda, he heard cries for help.

“It was a choice of jumping from the second floor and getting injured, or dying,” he told NHK, adding that there were employees who could not bring themselves to jump.

Rui Yamaguchi, who works in a factory nearby, said he saw the suspect when he was detained.

“He looked like a mannequin with no hair and blackened. One of his pants legs had gone around his calf. It looked like it had burnt off,” he said.

Near the blackened studio building, where the smell of burning timber lingered over the neighborhood, animation fans of many nationalities joined local residents, queuing up to add to a growing pile of flowers, drinks and other offerings.

Bing Xie, 25, a Chinese student at Kyoto University, said she could not forgive the arsonist.

“The young people at Kyoto Animation were beautiful and warm and it is hard to accept they are gone.”

Police guarded the site as investigators, some on the roof near where many died in a connecting stairwell, examined the torched three-story building.

Tributes to the victims lit up social media, with world leaders and Apple Inc’s chief executive offering condolences. The hashtag #PrayforKyoAni, as the studio is known among fans, has become popular.

Kyoto Animation produces popular ‘anime’ series such as the “Sound! Euphonium”. It is also known for “Violet Evergarden”, which has been shown on Netflix.

Fumiko Shimizu, 91, who lives close to the building and watched the fire from her balcony at home, said she regularly greeted the staff she met in the street.

“I used to see them going to the convenience store in groups of six or so to buy lunch boxes. There were a lot of young people, in the twenties and thirties,” she said.

“They died so young when it would be alright for somebody like me to die anytime.”