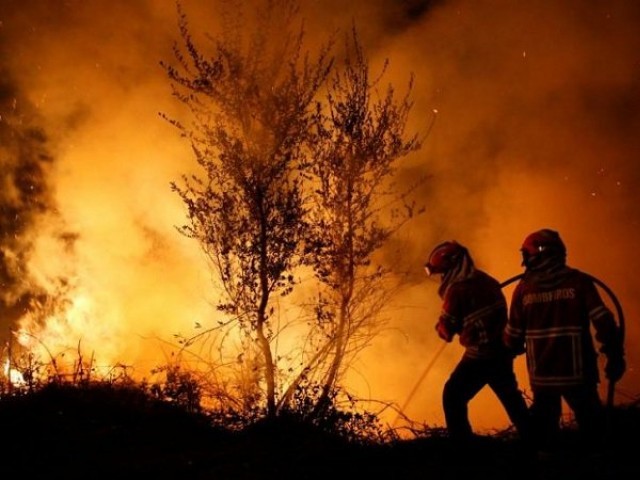 KYOTO, JAPAN: Japanese police on Friday were investigating a suspected arson attack that killed 33 people in what would be one of the country’s deadliest crimes in decades, with the motive for the blaze still unclear.

The horrific fire in the city of Kyoto gutted a building owned by the animation production company Kyoto Animation, a firm behind hit anime television series beloved by the genre’s many fans.

The tragedy shocked Japan, where violent crime is extremely rare, and there were questions over how so many people could have died in a country where fire safety is taken very seriously, in part because many people still live in wooden homes.

The investigation into the deadly fire was being complicated by the fact that the chief suspect, a 41-year-old man detained on Thursday, suffered serious burns in the blaze and was in the hospital.

Some reports on Friday said the man was unconscious, and that police had been unable to interrogate him so far.

Only sketchy details have emerged about the man who reportedly doused the building in a flammable substance and yelled “drop dead” before setting the liquid alight.

Local media said he did not appear to have any ties to Kyoto Animation. He had reportedly also brought knives and a hammer to the building.

Some reports suggested the man believed the company had stolen his work, with the local Kyoto Shimbun newspaper reporting that he told police: “I set the fire because they stole novels.”

On Thursday, Kyoto Animation president Hideaki Hatta said the firm had been threatened.

“There have been emails with death threats”, he told reporters, without giving further information.

Details were still emerging about the victims in the blaze, which also injured 36 people, 10 of whom suffered serious injuries.

Local police said 12 men and 20 women were among the dead, with one victim not yet identified. Most were believed to be employees of the company.

The blaze appeared to have engulfed the three-story building with shocking speed, and firefighters said many of the bodies they found were on a stairwell leading from the top floor to the roof, suggesting people were trying to escape the flames when they were overcome.

Keizo Harafuji, a former scientific investigation officer for the Tokyo police, told public broadcaster NHK that those trapped inside would have had little chance of escape.

“Flames spread incomparably faster with gasoline than in a normal fire,” he said.

“So I think the flames spread so fast that there was no time for the fire alarm and fire doors. It would have been difficult to escape after the fire began.”

Eyewitnesses described a raging inferno that left those outside unable to even approach to help people trying to escape.

“There was a person who jumped from the second floor. The person jumped, desperately trying to get away from the building but we couldn’t rush to help because the fire was so strong,” one local woman told an online affiliate of the Asahi Shimbun daily.

On Friday morning, a handful of people arrived at the site of the charred building to lay flowers.

Japan’s Prime Minister Shinzo Abe said he was praying for those affected.

The blaze also prompted an outpouring of grief and support from the anime industry and fans of the sector, which is one of Japan’s most well-known cultural products.

An online fundraiser organised by an American anime licencing firm had raised over one million dollars by Friday morning.

“Thank you to everyone who has shown their support for those impacted by the tragedy at KyoAni,” the organisers Sentai Filmworks wrote, using a nickname for Kyoto Animation.

“Together, we can bring light to this incredibly dark time.”