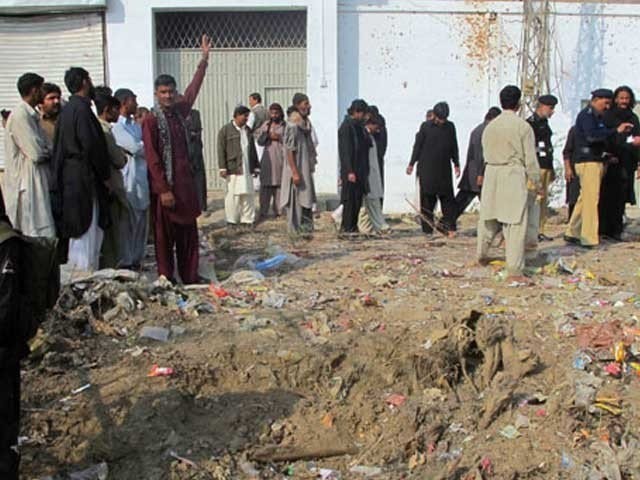 At least nine people were martyred and 30 others injured in a gun attack on a police checkpost and a subsequent suicide blast at the hospital the wounded were shifted to in Khyber-Pakhtunkhwa’s (K-P’s) Dera Ismail Khan on Sunday.

So far, six policemen and three civilians have been slain in the deadly twin attacks.

Two policemen were martyred on the spot as militants attacked their checkpost early with the slain being identified as Constable Jahangir and Constable Inam.

Policeman martyred as vehicle comes under fire in Charsadda

A powerful bomb then went off outside the trauma centre of the hospital where the injured policemen were taken.

District police chief Salim Riaz said the blast was a suicide bombing carried out by a woman, adding that, “The woman bomber, aged around 28 years, came on foot and blew herself up.”

Riaz said gunmen on four motorcycles attacked the check-post at Kotla Saidan at around 7:45am.

“As the injured were shifted to the District Teaching Hospital another bomber blew himself up next to the trauma center. Four police officers and three civilians were martyred with 30 others injured in the attack,” Riaz told the media.

Tehreek-e-Taliban Pakistan spokesperson Muhammad Khurasani claimed responsibility for the attack in a statement.

Khurasani said the attacks were carried out as retribution for the killing of two Taliban commanders a month ago.

The banned outfit’s spokesperson, however, denied the bomber being a woman.

Officials at the Combined Military Hospital (CMH) said five dead bodies and at least 30 injured people have been brought to the medical facility.

“Blood was spattered everywhere after the blast with the entire  building being evacuated,” an eyewitness told The Express Tribune.

A source inside the BDS said that around eight to 10 kilogrammes of explosive was used in the blast.

Police and other law enforcement officials have cordoned off the area and a search operation has begun which included teams of the bomb disposal squad.

Prime Minister Imran Khan has strongly condemned the terrorist attacks, as well as expressing his deep grief and sorrow over loss of lives.

The prime minister prayed for the eternal peace of departed souls and bereaved families to bear the loss with equanimity, PM office’s media wing  said in a press release.

While K-P Police Inspector General Dr Naeem Khan said that those behind the heinous attack would be brought to justice.