Gunmen blast their way into a police statio­n, open fire on police and candid­ates taking an exam to join the force
By Muhammad Zafar
Published: January 29, 2019
Tweet Email 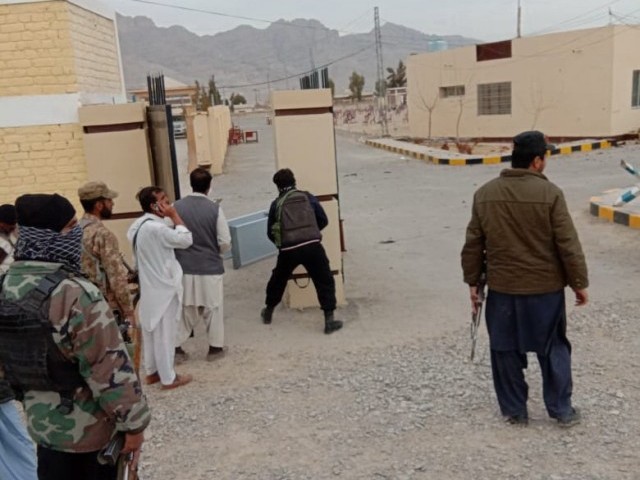 Security officials at the attack site in Loralai district of Balochistan on Tuesday. PHOTO: BANARAS KHAN/EXPRESS

QUETTA: Three suicide bombers stormed into the offices of a senior police officer in a central Balochistan district on Tuesday afternoon, killing nine people – among them three policemen, five civilian employees of police and a candidate of police department – before they were eliminated.

The attackers, armed with suicide vests, grenades and assault rifles, detonated a hand grenade at the entrance to the complex of DIG in Loralai before storming inside where around 800 candidates were taking a recruitment exam for the police force.

“The police on duty responded and shot one of three attackers at the entrance to the complex who blew himself up,” the military’s media wing, the Inter-Services Public Relations (ISPR), said in a statement.

The remaining two suicide bombers opened indiscriminate fire and entered one of the side rooms, according to the ISPR. “FC Balochistan and Army troops were called in, who safely evacuated around 800 candidates,” it added.

After evacuating the candidates, the troops started the operation to take out the two suicide bombers hiding in the room. They were subsequently shot dead and the premises were cleared.

“Nine persons, including three policemen, five civil employees of police and one civilian candidate embraced shahadat,” the ISPR said, adding that 21 people, among them 12 policemen and 9 civilian candidates, were also wounded in the attack.

Medical Superintendent Loralai Civil Hospital Dr Faheem said 10 bodies and 21 injured were brought to the hospital. Those critically injured were shifted to the Combined Military Hospital.

The chief minister called for the attack’s inquiry report, and vowed to take decisive action against terrorists.

Meanwhile, the banned Tehreek-e-Taliban Pakistan claimed responsibility of the attack.

Earlier this month, at least four members of the security forces were killed in an attack on a Frontier Corps training base in Loralai.