The dead - at least one of them Muslim - were suspec­ted of steali­ng cattle­
By AFP
Published: July 19, 2019
Tweet Email 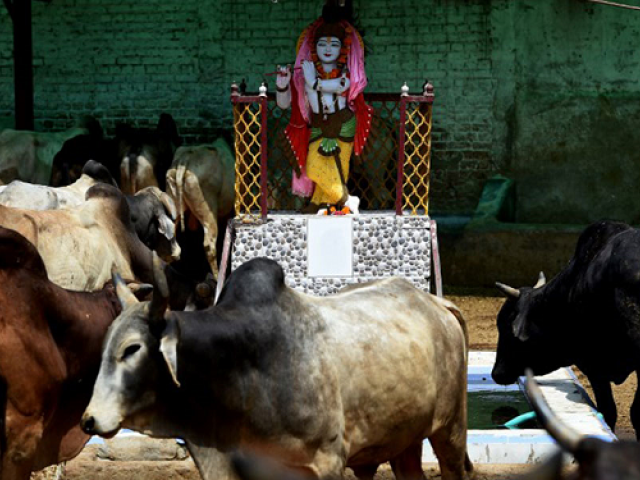 In this photograph taken on April 24, 2017, a statue of the Hindu god Lord Krishna is seen at a cow shelter in the Indian capital New Delhi. PHOTO: AFP

PATNA, INDIA: A mob in an Indian village beat to death three men suspected of stealing cattle on Friday in a new “cow vigilante” attack reported by police that highlights hardening Hindu nationalism.

A fourth man was in critical condition in hospital after the attack in a village in the eastern state of Bihar.

Police said three people had been detained for the killings and others in the village were suspected. At least one of the dead was Muslim.

The group had been driving a truck and were stopped in Pithori Nandlal village by a crowd who accused them of stealing cows, which are considered sacred by Hindus.

Many Indian states ban the eating and slaughter of beef. Attacks on individuals suspected of trading in cows have increased however since Hindu nationalist Prime Minister Narendra Modi came to power in 2014, according to rights groups.

A Bihar police official told AFP the latest victims, who came from a rival village, “were badly beaten on suspicion of stealing cattle and died on the way to the hospital.”

As news of the deaths spread, residents from the men’s home village went to the hospital to stage an angry protest, police said. Relatives of the dead beat up a man from Pinthori Nandlal.

Many of the “cow vigilante” attacks in recent years have been on Muslims and the opposition Congress party accused Bihar’s state government of failing to protect minorities.

“Three people were beaten to death and are victims of mob lynching. But the government will give a different version of the incident to save its skin,” Congress lawmaker Premchand Mishra said in the state assembly.

At least 44 people were killed in cow-related violence from 2015 to 2018, according to Human Rights Watch.

At least three other cases have been reported this year before the latest three men were killed. In May, a Muslim man was shot in the head in Kashmir state by cow vigilantes.

Last month, a US State Department report said religious violence against minorities had increased under Modi. It said Muslims and low-cast Dalits had been particularly targeted for eating beef. India rejected the report.