The nature of Abbasi’s arrest and the ongoing hunt for fellow Pakistan Muslim League-Nawaz (PML-N) leader Ismail has elicited a sharp response from opposition parties against the government’s accountability drive.

Abbasi, a member of the legislature, had his vehicle intercepted by a NAB team at the Thokar Niaz Baig motorway interchange, while he, along with fellow PML-N leader Ahsan Iqbal and party spokesperson Marriyum Aurangzeb, was on his way to attend a press conference.

Earlier, the anti-corruption watchdog had summoned Abbasi premier in the LNG case but he skipped the hearing. The team investigating the case said that Abbasi had not answered all the questions and was continually seeking more time. 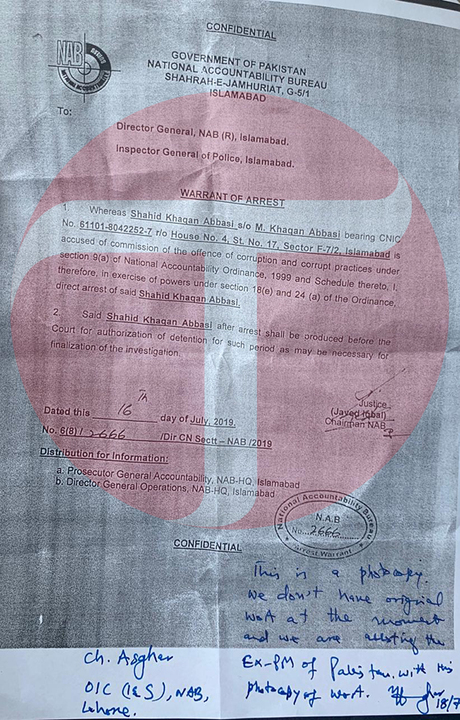 Meanwhile, NAB teams in Karachi and Islamabad were dispatched to take Miftah Ismail into custody. A team raided his Karachi residence but had to return empty-handed as he wasn’t there.

The NAB team had to face-off with PML-N supporters after they cordoned off Ismail’s residence and tried to enter the premises.

According to the domestic help, Ismail left the house earlier in the day and his mobile phone was switched off.

Upon this, a fresh team, accompanied by female officials, entered the residence and questioned those at home including the family members. Sources added that the NAB also raided two other locations owned by Ismail’s family.

As per the arrest warrant, Abbasi is “accused of commission of the offence of corruption and corrupt practices under Section 9(a) of National Accountability Ordinance (NAO), 1999.”

Abbasi “shall be produced before the court for authorisation of detention for such period as may be necessary for finalisation of the investigation”, the arrest warrant added.

He is expected to be presented in court tomorrow, with accountability judge Chaudhry Ameer Khan likely to hear the case.

The bureau is investigating alleged corruption in the award of a contract to import LNG from Qatar by Abbasi when he was minister for petroleum and natural resources in the cabinet of former premier Nawaz Sharif.

Abbasi is the principal accused in the case that dates back to 2015. It was registered on the complaint of a former member of the Planning Commission along with others, who accused Abbasi of misusing his authority and causing a potential $2bn loss to the national exchequer in 15 years.