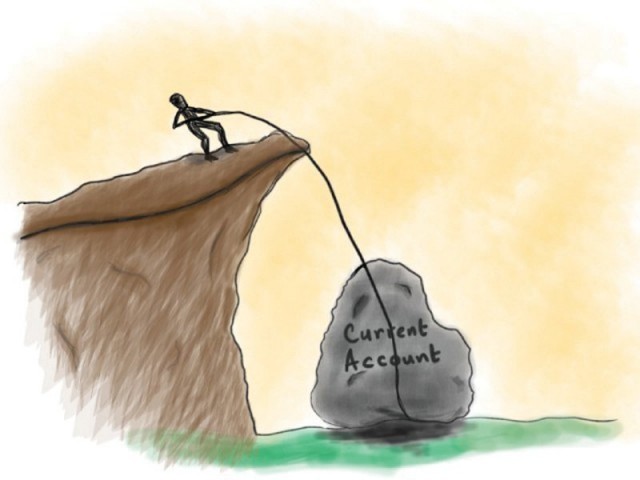 KARACHI: Pakistan’s current account deficit narrowed 32% to $13.59 billion in the fiscal year ended June 30, 2019 mainly due to a notable growth in inflow of worker remittances and reduction in import of goods and services.

However, the country failed to achieve the deficit target both in relation to the country’s gross domestic product (GDP) and in total amount.

The deficit came in at 4.8% of GDP worth $283.9 billion compared to the target of 4% for FY19. In terms of total amount, the government had targeted to restrict the deficit to $13.3 billion, according to the Planning Commission.

“The current account deficit has dropped but it still remains elevated,” Arif Habib Limited Head of Research Samiullah Tariq said while talking to The Express Tribune.

“This is unsustainable,” he said. “If it remains elevated in the current fiscal year as well, it will keep mounting the pressure on the rupee (against the dollar).”

The deficit beat the target mainly due to the disappointing export of goods, which slipped to $24.21 billion against expectation for around $28 billion, after the central bank let the rupee depreciate 32% to Rs160.05 against the US dollar in FY19.

In remarks made in the past few days, State Bank of Pakistan (SBP) Governor Reza Baqir said depreciation of the rupee and hike in key interest rate had helped in contraction of twin deficits – the current account and fiscal deficits – significantly. 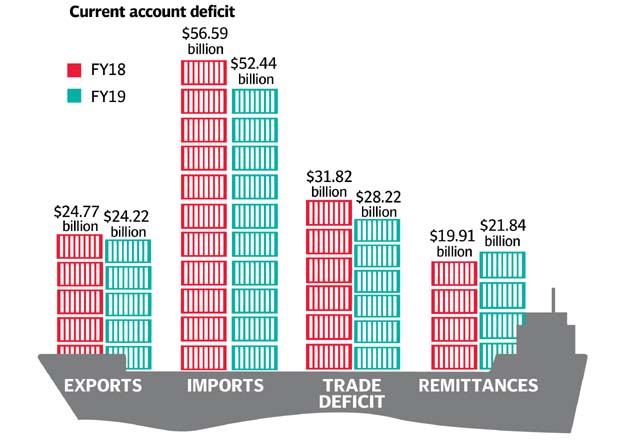 Pakistan has remained a net oil importing country to meet domestic requirement. Oil imports come to around one-fourth of the total import bill of goods valuing at $52.43 billion in FY19.

The central bank data suggested that the authorities concerned had revised up the current account deficit for the prior fiscal year 2017-18 twice during FY19. They revised up the deficit by a cumulative $1.9 billion to a record high at $19.89 billion for FY18 compared to around $18 billion provisionally reported in July 2018.

“The deficit was revised upwards after the government adjusted import numbers related to the China-Pakistan Economic Corridor (CPEC),” said the head of research of Arif Habib Limited.

He said growth in exports was a must to push down the current account deficit to the target of $8.5 billion for the current fiscal year, which started on July 1, 2019.

Besides, the country had to extensively work on finding import substitutes and achieving energy efficiency to further cut imports in the current fiscal year, he said.

The inflow of remittances from overseas workers increased around 10% to $21.84 billion in FY19 compared to $19.91 billion last year.

The higher current account deficit was partially financed through the country’s foreign currency reserves. Accordingly, they persistently remained insufficient, especially in the past one year, despite borrowing $9.7 billion from friendly countries including China, Saudi Arabia, the United Arab Emirates and Qatar and receipt of the International Monetary Fund’s (IMF) first loan tranche of $991.4 million during the year.