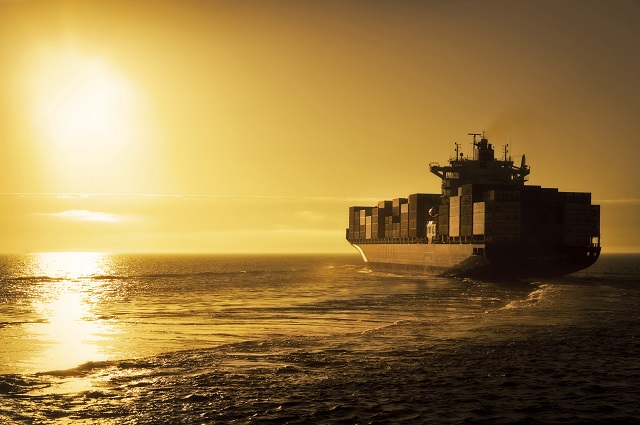 KARACHI: Pakistan’s current account deficit (CAD) narrowed considerably by 29.5% to $9.6 billion in first nine months (July-March) of the current fiscal year mainly due to much-needed drop in imports and a significant rise in worker remittances.

The current account deficit stood at $13.6 billion in the same period of previous year, the State Bank of Pakistan (SBP) reported on Thursday.

On average, the deficit has dropped to $1.06 billion a month so far in the current fiscal year compared to $1.5 billion a month in the corresponding period of last year.

The central bank said import of goods shrank 5% to $39.3 billion in Jul-Mar FY19 compared to $41.4 billion in the same period of last year.

“Imposition of regulatory duty on the import of hundreds of goods and massive depreciation of the rupee against the US dollar and other major currencies made the imports expensive. Consequently, the aggregate demand for imports decreased,” Emerging Economics Managing Director Muzammil Aslam told The Express Tribune.

Moreover, a significant reduction in the government’s development budget – called the Public Sector Development Programme (PSDP) – and completion of Early Harvest projects under the China-Pakistan Economic Corridor (CPEC) also caused a drop in import of machinery and equipment, he said. 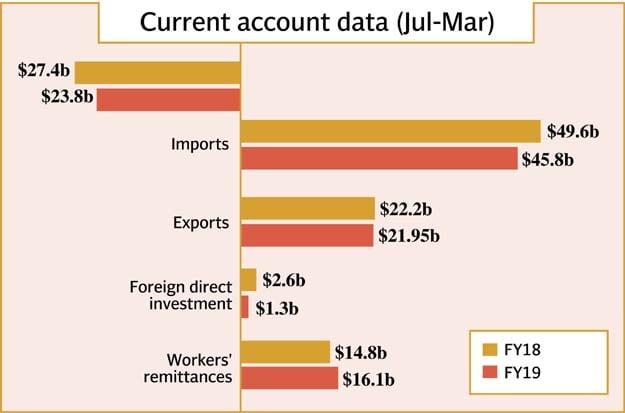 Remittances from overseas Pakistani workers surged 9% to $16 billion in the first nine months of FY19 compared to $14.8 billion in the same period of last year, the central bank said. “The growth in remittances came after financial institutions and government officials stepped up efforts to give a push to inflows,” a banker said recently.

“The State Bank of Pakistan (SBP) and National Bank of Pakistan (NBP) have taken several measures, including the offer of cash reward on receipt of remittances through legal channels. Apart from this, a crackdown has been launched on illegal hawala/hundi operators and action taken against dollar hoarders…these all are positive steps to attract higher remittances,” a state-owned bank official dealing in worker remittances said.

However, the foreign direct investment (FDI) dipped 51.5% to $1.3 billion in first nine months of FY19 compared to $2.6 billion in the same period of previous year.

“The drop in foreign investment comes as the local currency (rupee) remains in an adjustment phase against the US dollar, which does not suit foreign investors,” he said.

“Pakistan was to pay interest at the end of Jan-Mar 2019 quarter. Pakistan’s foreign debt has surged to $90 billion as of now,” he said.

The central bank said the balance of trade in goods and services rose 32.8% to $2.3 billion in March compared to $1.8 billion in February.