ISLAMABAD: As the plea to annul death sentence awarded to Indian spy Kulbhushan Jadhav, who self-confessed to fomenting terrorism and engaging in espionage within Pakistan by a military court was rejected by the International Court of Justice (ICJ), all Indian hopes of seeking remedies through international arbitration dashed on Wednesday.

The judgment, delivered by ICJ President Abdulqawi Ahmed Yusuf, to a packed court at The Hague, however, allowed India consular access to the convicted spy.

Jadhav, also a serving commander of the Indian Navy, was convicted on April 10, 2017 for fanning terrorism in Balochistan and Karachi, almost a year after his arrested from Balochistan in March 2016.

India had later knocked the door of the ICJ, which stayed Jadhav’s execution as its 16-judge bench started its proceedings on Indian appeal. India in its plea had asked the ICJ to direct Pakistan to take steps to annul decision of the military court; to release Jadhav and to facilitate his safe passage to India.

However, the ICJ says Jadhav’s conviction and sentence is not violation of Article 36 of the Vienna Convention. “Thus, the court finds that these submissions made by India cannot be upheld,” it says. 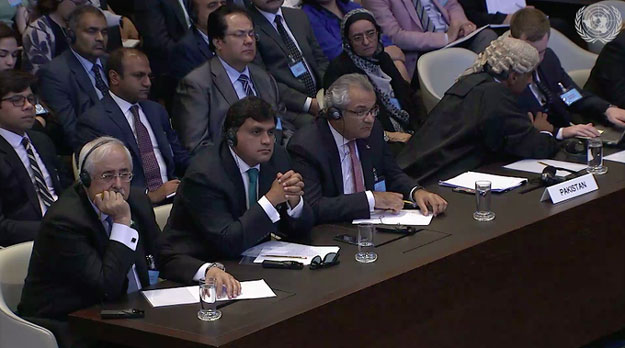 However, for the first time, the ICJ with 15-1 majority rules that consular access should be given to spies under Article 36 of the Vienna Convention.  Ad hoc judge from Pakistan, Tassaduq Hussain Jilani, however, writes a dissenting note.

The ICJ in its 42-page verdict also rules that Pakistan is under an obligation to cease those acts and to comply fully with its obligations under Article 36 of the Vienna Convention.

Paragraph (c) states that consular officers shall have the right to visit a national of the sending state who is in prison, custody or detention, to converse and correspond with him and to arrange for his legal representation.

They shall also have the right to visit any national of the sending state who is in prison, custody or detention in their district in pursuance of a judgment. Nevertheless, consular officers shall refrain from taking action on behalf of a national who is in prison or detention if he expressly opposes such action.

The ICJ has also disappointed India as it neither annulled Jadhav conviction nor referred his matter for re-trial.  The court has directed Pakistan to take all measures to provide for effective review and reconsideration, including, if necessary, by enacting ‘appropriate legislation’.

The ICJ also believes that the obligation to provide effective review and reconsideration can be carried out in various ways and the choice of means is left to Pakistan.

The court has asked Pakistan for “effective review and reconsideration of the conviction and sentence of Mr Jadhav” so as to ensure that full weight is given to the effect of the violation of the rights set forth in Article 36, paragraph 1, of the Convention and guarantee that the violation and the possible prejudice caused by the violation are fully examined.

The ICJ has also maintained stay on the execution of Jadhav till ‘effective review’.

The ICJ also considers that violation of the rights set forth in Article 36, paragraph 1, of the Vienna Convention, and its implications for the principles of a fair trial, should be fully examined and properly addressed during the review and reconsideration process.

In particular, any potential prejudice and the implications for the evidence and the right of defence of the accused should receive close scrutiny during the review and reconsideration, it adds.

The judgment notes that in the present case, the death sentence imposed on Jadhav by the Field General Court Martial of Pakistan was confirmed by the Chief of Army Staff on April 10, 2017.

The evidence suggests that Jadhav appealed to the Military Appellate Court under Section 133 (B) of the Pakistan Army Act of 1952, but that the appeal was rejected.

“With regard to the petition procedure, the evidence suggests that Mr Jadhav has made a mercy petition to the Chief of Army Staff, and that the mother of Mr Jadhav has sought to file a petition with the federal government of Pakistan under Section 131 and an appeal under Section 133 (B) of the Act. There is no evidence before the court to indicate the outcome of those petitions or that appeal,” it adds.

The ICJ further notes that, according to Pakistan, the high courts of Pakistan can exercise review jurisdiction. The court observes, however, that Article 199, paragraph 3, of the Constitution of Pakistan has been interpreted by the Supreme Court as limiting the availability of such review for a person who is subject to any law relating to the Armed Forces of Pakistan, including the Pakistan Army Act of 1952.

The judgment also states the Supreme Court has stated that the high courts and the Supreme Court may exercise judicial review over a decision of the Field General Court Martial on “the grounds of coram non judice, without jurisdiction or suffering from mala fides, including malice in law only”

Article 8, paragraph 1, of the Constitution provides that any law which is inconsistent with fundamental rights guaranteed under the Constitution is void, but this provision does not apply to the Pakistan Army Act of 1952 by virtue of a constitutional amendment.

However, the ICJ notes that it is not clear whether judicial review of a decision of a military court is available on the ground that there has been a violation of the rights set forth in Article 36, paragraph 1, of the Vienna Convention.

The ICJ also refers the Peshawar High Court last year verdict, wherein it is held that the high court  had the legal mandate positively to interfere with decisions of military courts “if the case of the prosecution was based, firstly, on no evidence, secondly, insufficient evidence, thirdly, absence of jurisdiction, finally malice of facts & law. The government of Pakistan has appealed the decision and the case was still pending at the close of the oral proceedings in the present case.

The counsel for Pakistan assured the court that the high courts of Pakistan exercise “effective review jurisdiction”, giving as an example the decision of the Peshawar High Court.