PM Imran to present special painting to Trump in US visit

PM Imran to present special painting to Trump in US visit 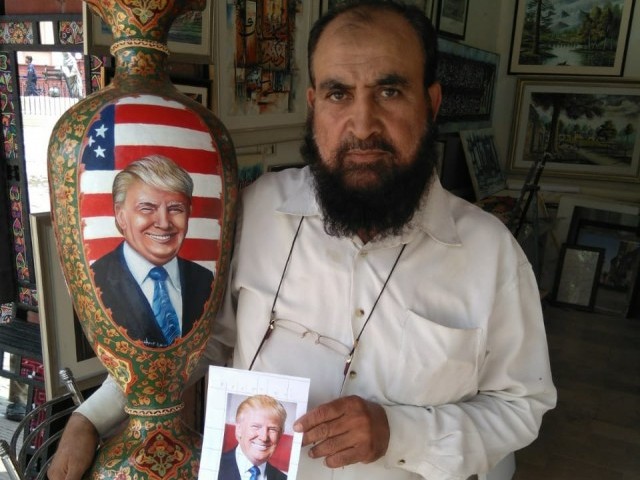 ISLAMABAD: Prime Minister Imran Khan will present a special portrait to US President Donald Trump during his maiden visit to Washington, aiming to reset the strained bilateral relations between the two states, later this month.

Dispelling speculations about the trip, Pakistan’s Foreign Office and the White House have now confirmed that the two leaders would meet on July 22.

The portrait of the US president has been made on a camel skin vase, which according to artist Hanifullah Khan, is one of the oldest crafts in Multan.

The task was commissioned to the prominent artist by the Ministry of Information and Broadcasting to enhance bilateral and cultural ties between the two countries.

Speaking to The Express Tribune, Hanif said the special task, assigned to him by the ministry’s Lok Virsa department, was challenging but an honour for him.

He said illustrating Trump’s hairstyle was a quite difficult and more painstaking than painting his face on the small vase.

“It requires a lot of rigorous work, and special colours are used which last up to 30 to 40 years,” he added.

Hanif, who has been painting for years, said he also made portraits of Saudi Crown Prince Muhammad bin Salman and Qatar’s Emir Sheikh Tamim bin Hamad Al Thani on these vases.

You’re part of mafia that pressurises judges, Maryam hits back at PM