Washin­gton says visit to focus on bolste­ring Pak-US cooper­ation and bringi­ng peace to the region­
By Our Correspondent
Published: July 10, 2019
Tweet Email 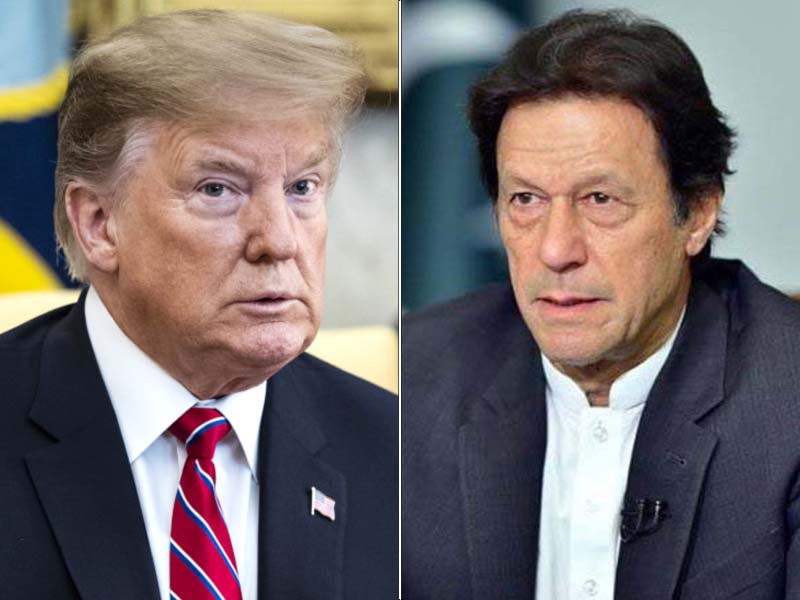 KARACHI: The White House has confirmed the itinerary of Prime Minister Imran Khan’s first visit to the United States, putting to rest a guessing game in the media about the trip set off by an earlier State Department statement.

“President Donald Trump will welcome Prime Minister Imran Khan of the Islamic Republic of Pakistan to the White House on July 22, 2019,” the White House press secretary said in a statement Wednesday evening.

The visit, it said, will focus on strengthening cooperation between the United States and Pakistan to bring peace, stability, and economic prosperity to a region that has seen far too much conflict.

“President Trump and Prime Minister Khan will discuss a range of issues, including counterterrorism, defense, energy, and trade, with the goal of creating the conditions for a peaceful South Asia and an enduring partnership between our two countries,” it added. 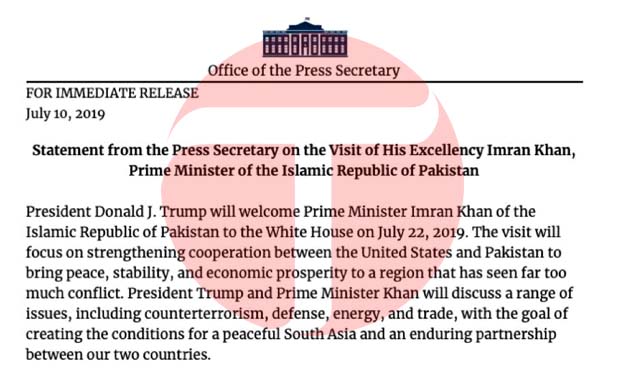 The White House confirmation came hours after a statement by the US State Department triggered speculations in the media about the trip.

“To my knowledge, that [Imran’s visit] has actually not been confirmed by the White House,” said State Department spokesperson Morgan Ortagus at a press briefing.

The spokesperson added that she has read reports of the visit, but it is up to the White House “to confirm or not confirm” the visit.

“I know that I have read the same reports that you have, but I would reach out to the White House to confirm or not confirm that visit, but – we don’t have anything to announce here from the State Department,” she said in response to a question regarding expected meetings between the US and Pakistani leadership.

Pakistan’s foreign minister has already confirmed that the prime minister would be travelling to the US on July 22.

After the State Department’s statement triggered a guessing game in the media, the Foreign Office spokesperson sought to dispel rumours about the trip.

Mohammad Faisal said that Islamabad was in “close contact with the US side” and that formal announcements for such events are made at an appropriate time.

On July 4, the spokesperson confirmed that Premier Imran would meet President Trump on July 22 at the White House.

Pakistani officials had stated that the visit is meant to reset bilateral ties between the two countries.

The visit will be significant given the fact that this would be the first high-level interaction between the two countries during Trump’s tenure .

Diplomatic sources claimed the visit had been finalised after hectic behind-the-scene efforts by the two sides through diplomatic channels.

While observers say Trump’s willingness to host Imran suggests that the two sides might have made forward movement on certain thorny issues, particularly Afghanistan.

President Trump has been critical of Pakistan’s role in the fight against terrorism, especially Islamabad’s role in Afghanistan. His administration has suspended security and other assistance to Pakistan, accusing it of ‘lies and deceit.’

Earlier this year, President Trump and Premier Imran had had a verbal duel on Twitter over Pakistan’s role in the fight against terrorism.

Officials said the premier would share his perspective on the Afghan endgame as well as how to build trust between the two countries.

The FO spokesperson said there was an acknowledgment of Pakistan’s role in Afghanistan by the US.

Just ahead of the prime minister’s visit, the United States branded the Balochistan Liberation Army (BLA) a global terrorist organisation. The BLA has been behind a number of terrorist attacks in Balochistan and other parts of the country.

Pakistan banned the BLA in 2006 and urged other countries to follow suit.

The latest move by the US, according to Pakistan, would help shrink space for the terrorist outfit to operate.

US wants North Korea freeze as beginning, not end, of denuclearisation