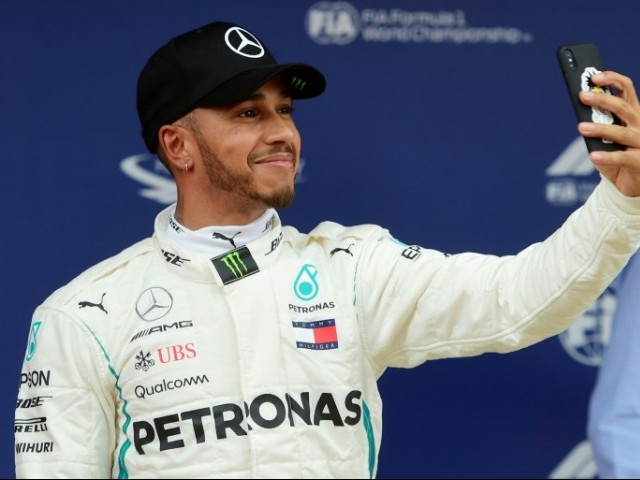 The defending five-time world champion and current series leader was asked to respond to claims by rival Red Bull team boss Christian Horner that lton was now the 'best driver in the world.' PHOTO: AFP

SILVERSTONE: Lewis Hamilton did his best to avoid controversy Thursday when he ducked comparisons with other drivers and heaped praise on his countrymen ahead of his home British Grand Prix.

The defending five-time world champion and current series leader was asked to respond to claims by rival Red Bull team boss Christian Horner that lton was now the ‘best driver in the world.’

Horner had suggested that the 21-year-old Dutch driver, who ended Mercedes’ winning start to 2019 by winning last month’s Austrian Grand Prix for Red Bull, would beat Hamilton if they raced in equal cars.

“I don’t compare myself to anybody,” said Hamilton. “I don’t need to. I don’t really have a response to his [Horner’s] claims…Ultimately every now and then someone needs certain attention.

“I think Max has been doing a great job and it is really exciting to watch. I think the last race was fantastic. It will be really interesting to see how they go moving forward.”

Hamilton aims to bounce back with record sixth home win

Asked where he would be in 2024 and beyond, Hamilton said he could not imagine what he would be doing, but that if was still coming to Silverstone, it would be as a driver. “And if not, I won’t be here in any other capacity…”

Hamilton will be seeking a record sixth British Grand Prix win this weekend, as Mercedes try to bounce back from their defeat in the Styrian Alps.

“I think we are fully aware that the Red Bulls and Ferraris have taken a step forward and the pace that they had at the last race was great,” he said. “I expect this weekend that it will be closer between us all.

“Last year, Ferrari were super-fast here, as were the Red Bulls. I think the Red Bulls were a little bit down, but now they have the new engine I think they will be even quicker. It is definitely not going to be an easy weekend.”

He explained how much his home event meant to him.

“It really is a spectacular weekend,” he said. “There’s excitement, there’s the adrenaline going, there’s pressure – my whole family is coming this weekend – it’s that one weekend where it’s the most special because you’ve got your family and closest support around you.

“I’ve been really privileged to come here and have some spectacular races…I’m trying to make sure I remain calm and level-headed. I feel like I have a mountain to climb this weekend and who better to help me do it than the British fans.”