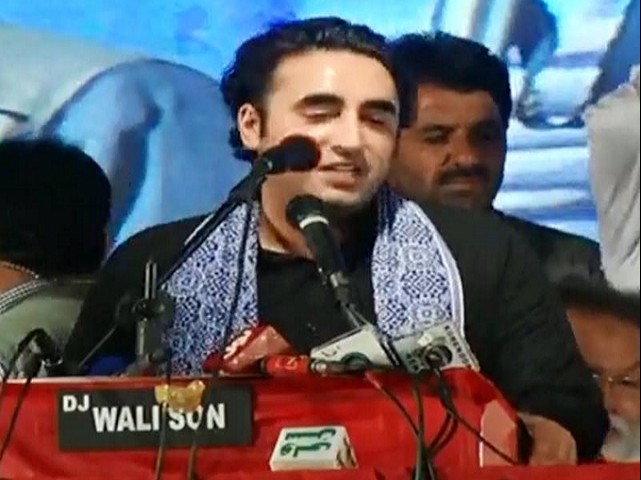 PPP chairman urges all state institutions to stay within their constitutional domain. SCREENGRAB

HYDERABAD: Pakistan Peoples Party (PPP) Chairman Bilawal Bhutto Zardari has asked Election Commission of Pakistan (ECP) to prove through transparent conduct of the upcoming by-elections that the institution is an election commission and not a “selection commission”.

“I want to ask the election commission that how many more elections they will let to be rigged for [prime minister] Imran Khan and his associates,” Bilawal asked, while talking to the media at Sukkur press club on Thursday.

The PPP’s chairman also disapproved deployment of the armed forces inside the polling stations during the 2018 election.

“If Gen Ziaul Haq or Gen [Pervez] Musharraf didn’t need to deploy the army inside the polling stations, then what’s the need of the deployment today?” he questioned.

He contended that through deployment in the 2018 general elections, the institution of army was made controversial and the same mistake was being repeated again in the by-elections.

“I want to ask why they are doing this. Is it for Imran?”

He reiterated that the 2018 elections were in essence a process of selection and the same has been happening in subsequent by-elections.

Replying to a query about the election of the Senate chairman, Bilawal said the incumbent chairman Sadiq Sanjrani should have resigned on moral grounds.

He added that Sanjrani had lost the majority support as he was elected by the opposition parties which no longer considered him apt for the position.

He said that the opposition parties have chosen Senator Hasil Bizenjo as their candidate for the chairman Senate, adding that he fully endorsed the choice.

Commenting on the electoral process of the Senate elections, he expressed hope to witness transparency.

“But we also know that in Naya Pakistan, the people [a reference to the powerful quarters] don’t believe in democracy or election but only in the selection.”

When asked to comment on Pakistan Muslim League-Nawaz’s leader Shahid Khaqan Abbassi’s statement about the mid-term elections, Bilawal said elections without electoral reform will be a repetition of the ‘selection’ process.

“If a new election is held by means of same selection process, there will be no benefit.”

Bilawal reiterated his disapproval of any political move from the opposition parties which undermined parliament. He also underscored that the ouster might make PM Imran appear as a political martyr.

The PPP chairman rejected Pakistan Tehreek-e-Insaf assertion of hue and cry by the opposition leaders to acquire a national reconciliation ordinance (NRO) from the government.

“I think only [PM] Khan needed the NRO,” he said, arguing that Khan is seeking a way out of the political crisis which may culminate in the dissolution of his government.

“It’s Khan who says in the public meetings that give back the money and go out of Pakistan.”

He said like every selected prime minister, Khan will also try to escape from the country once he is out of office. He vowed the PPP will not let him escape rather the party will hold him accountable for suppression of freedom of expression, inflation, unemployment and fake promises to the nation.

He blamed the PTI government for attacking democratic, human and economic rights of the people of Pakistan.

“The selected government has passed the budget [2019-20] by means of rigging. The PTI-IMF budget is a foreign made budget, not the Pakistani one.”