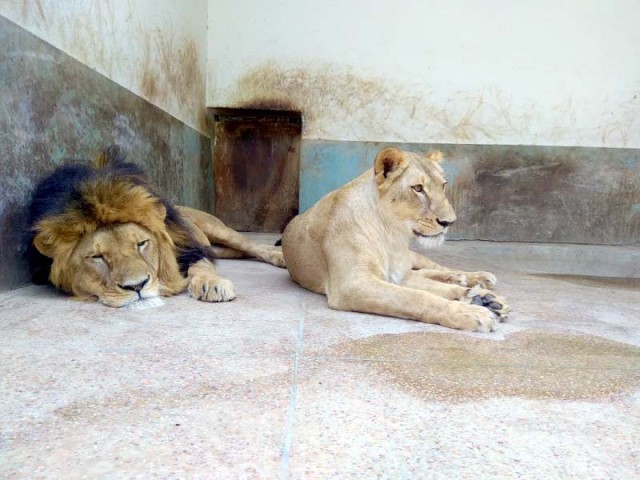 LAHORE: Two lions were euthanised in Lahore Zoo on Friday after being diagnosed with an incurable disease.

Speaking to The Express Tribune, Punjab Wildlife Department Director General (DG) Sohail Ashraf said that a total of four lions of the zoo were paralysed just six months after their birth three years ago and had been disabled since.

He added that the lions were leading very difficult lives. “Wildlife and veterinary experts made a lot of efforts over the years and succeeded in improving the health of two of the lions. However, there was no improvement in the health of the other two,” he said.”

To execute the euthanasia, a meeting of the zoo management was held to decide the fate of the ailing lions. The final approval to euthanise then was obtained from the Forest, Wildlife and Fisheries Department secretary after a recommendation from the zoo’s management team.

The magnificent lions and tigers at the Lahore Zoo are one of the main attractions that bring thousands of visitors to the facility every month.  Births of new cubs add to the excitement of visitors, especially children, who come from faraway areas to see the new additions.

However, due to the practice of inbreeding – the process of mating genetically similar organisms – the cubs born to the lions and tigers started developing different medical conditions, including brittle bones, weak immune systems and lack of organs.

Akin to the state-owned zoos, a similar situation prevails in private breeding centres in Punjab where the practice of inbreeding is rampant.

A few years back, many cubs born with weak bones died in infancy, forcing the zoo to stop the practice of inbreeding.

The zoo spokesperson Kiran Saleem told The Express Tribune that in order to control the situation and stop the transmission of genetic diseases to new cubs, the facility’s administration has decided to stop the process of inbreeding. Alternatively, big cats, which were recently gifted to the zoo by the United Arab Emirates (UAE), will be paired with the existing lions and tigers for the purpose of outbreeding.

“Now, we have 18 new tigers and lions –both males and females – that will be used for outbreeding to produce healthy cubs in future,” she said.

Shedding light on the issue, veterinary doctor Rizwan Khan said that inbreeding can lead to several diseases, including weak bones, lack of organs and physical deformities in cubs.

“Inbreeding results in homozygosity, which can increase the chances of offspring being affected by deleterious or recessive traits,” Rizwan Khan explained. “This, however, does not happen in all cases. Physically and genetically healthy animals often produce disease-free offspring.”

The Deputy Director of the Lahore Safari Zoo, Chaudhry Shafqat, said he is hopeful that the planned outbreeding will produce healthy cubs. He, however, added that the process is not as easy as it sounds because it requires a lot of effort and research.

He shared that when many cubs started losing their lives because of bone diseases in the past, he immediately changed their feed.

“I started feeding chicken to the cubs instead of beef, while the adult tigers and lions were left hungry once in a week. The practice helped us to a great extent. “

He employed the same practice at the Safari Zoo, due to which no unhealthy cubs were produced in the last few years.

“The health of the lions and tigers can be significantly improved if they are kept hungry twice a week,” he concluded.