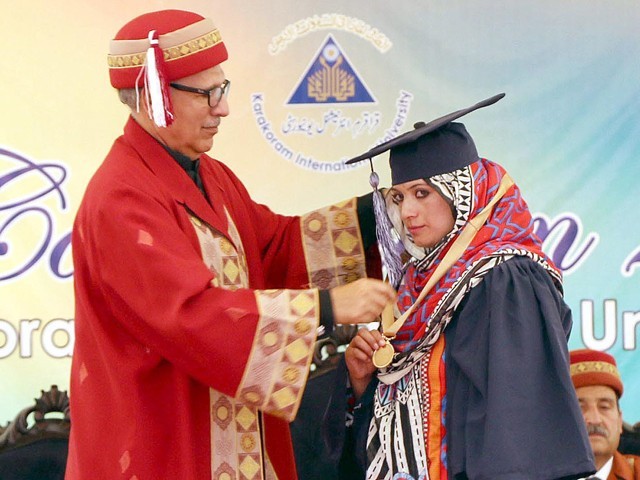 GILGIT: President Dr Arif Alvi on Wednesday said Pakistan has embarked on a journey of peace and progress due to Pakistan Army’s unmatched efforts and sacrifices.

He said this while addressing the 9th convocation of Karakoram International University (KIU), where he awarded degrees and awards to the students on completing degrees.

“This (development) was possible as armed forces rooted out terrorism from the country,” said the president, who was on a six-day visit to the region along with his family.

The president said Gilgit-Baltistan’s (G-B) tourism and mining sector’s potential could be utilised for human development, adding that he will continue working for the promotion of tourism development in the region.

710 degrees and 106 gold and silver medals were awarded to the students of BS and Masters programme in the ceremony.

President Alvi, who was invited as the chief guest, also awarded gold and silver medals to 110 position holders in different disciplines.

Speaking on the occasion, the vice-chancellor praised the university’s faculty, saying that 80 per cent of KIU faculty members are PhDs. He said more than 12,000 students have graduated from the university and are serving the nation in different fields.

Dr Shah said the university would soon serve as the country’s backbone due to its existence in an area which has international geo-strategic importance.

‘No king can save you now’, PM Imran tells Nawaz and Zardari