If Centre provid­es money to Sindh, we will reduce the tax rate, says CM
By Our Correspondent
Published: June 28, 2019
Tweet Email 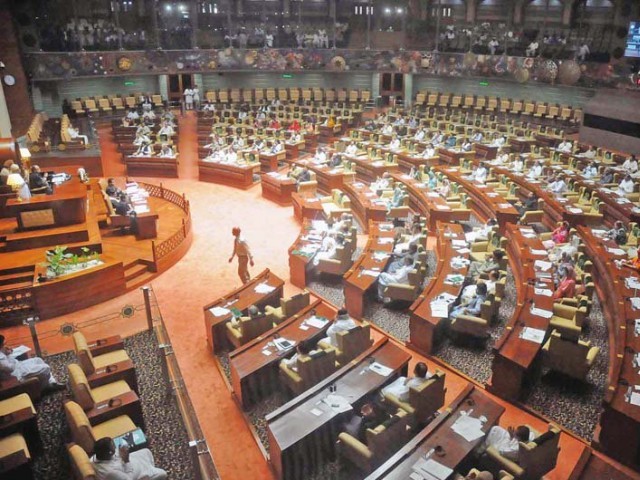 KARACHI: After much debate and resistance by the opposition, the Sindh Assembly approved on Thursday the Sindh Finance Bill, 2019. The opposition rejected the bill, claiming that the public has been burdened with taxes. Chief Minister Syed Murad Ali Shah, however, maintained that taxes have been imposed on certain things but they would try to ensure that the poor do not bear the brunt of the budget.

“If the Centre provides money to Sindh, we will reduce the tax rate by calling a special meeting of the assembly,” said Shah.

The CM, who also has the portfolio of finance, presented the bill in the assembly. He said that the rate for general sales tax (GST) in the budget for the next fiscal year was fixed at 13% which is the lowest rate in the country. The amount of tax collected from the urban areas will be the same as last year, he added.

He said that Sindh is to receive Rs126 billion from the Centre and if, by the next month, the money is transferred, the government will call a special session of the assembly and reduce the tax rate.

Responding to the opposition’s criticism that the urban areas have been burdened with a high tax rate, the CM said that Karachi is a part of Sindh and will remain so. He added that there is so need for further clarification on the matter. The opposition should remove this intrusive thought from their minds that the higher taxes are being collected from the metropolis as compared to other areas of Sindh. There is no upper Sindh, the whole province is one, he said.

Shah, expressing extreme disappointment over the offensive behaviour of the opposition parties, said that if they talk about my province in this manner, they should have the courage to hear the response.

The CM said that they have changed the net valuation table of tax. This prompted hooting from the opposition benches.

While objecting to the CM’s tone and tenor, the opposition leader Firdous Shamim Naqvi threatened to walk out to which the CM replied that if anyone wants to leave, they can. He maintained that he would continue to give an answer to anyone who defames his land.

Naqvi said that he talked patiently and had received a harsh response.

Excise and Taxation Minister Mukesh Kumar Chawla informed the assembly about the new taxes. He said that the tax on 3,000 CC luxury cars had been increased to Rs150,000. The federal government has increased the tax rate for commercial cars and the tax on these cars will be calculated according to the number of seats they have. He said that the government has the authority to apply new taxes in the finance bill.

The MQM-P lawmaker observed that the Sindh government has increased Rs25 billion on the sales tax on services. He said that the increase in taxes will affect the common man and sales tax will be collected from their pockets. He said that the urban areas of Sindh pay 90% of the tax and not even Rs700 million could be collected from rural Sindh. “That’s the reason we are rejecting the finance bill presented by the Sindh government”.

He remarked that instead of misguiding the people, the government should come clean and tell the people the truth. The budget presented by the provincial government is not tax-free and Karachi is burdened with the new taxes in this budget, he said.

Arsalan Taj Ghaman of Pakistan Tehreek-e-Insaf (PTI) said that tax has also been applied to CNG and petrol pumps. The opposition leader, Firdous Shamim Naqvi, said that the Sindh government’s budget documents don’t mention the effects to tax collections. The provincial government has applied numerous new taxes without improving the infrastructure of Karachi. A better justification could be given for these taxes if there were better civic facilities, he said.

He said incidents of car theft could be reduced by installing trackers in the vehicles. “What is the benefit of this government? It should fulfill its responsibilities,” he said. Tax should be collected from wealthy people instead of burdening the poor, he added.

The opposition members of the assembly opposed the bill and shouted slogans of ‘No’ when the clause by clause approval of finance bill began in the assembly. However, the assembly approved the bill despite the opposition’s resistance. Two amendments in the bill proposed by MQM-P’s Muhammad Hussain were also rejected.

The government has also applied tax on mosques, temples, madrassas, churches and imam bargahs. The property tax rates have also been increased on the properties of welfare organisations. A total of 5% sales tax has been applied on online taxi services like Uber, Careem and others as well as online businesses.

He thanked all the members of the assembly for the approval of the finance bill. He also announced to award a prize to the treasury department, Sindh Assembly Secretariat, Revenue, Excise and Taxation Department which is equal to three basic salaries.

The assembly’s session was adjourned till today (Friday).