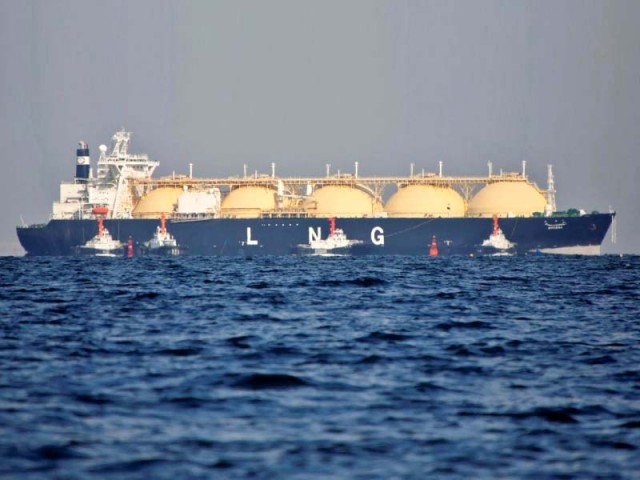 Pakistan is currently importing LNG from Qatar at 13.37% of Brent crude price, which is quite higher than the bids offered in the recent tender. PHOTO: FILE

Earlier, in response to a tender floated in December last year, PLL received price offers of over 12% of Brent crude. Later in March this year, PLL got lower price offers at around 9% of crude.

Officials suggest the government should secure more LNG contracts on spot basis following a dip in international LNG prices. At present, commodities trader Gunvor, headquartered in Geneva, and Italy’s Eni are supplying LNG at 11.62% and 11.9% of crude price under short- and long-term contracts. They are supplying 200 million cubic feet per day (mmcfd) of LNG through the second LNG terminal at Port Qasim.

The government has dedicated a handling capacity of 600 mmcfd to the second LNG terminal. Owing to the absence of other short- and long-term contracts, PLL is importing the remaining 400 mmcfd through spot purchases.

“The country will save around $8 million per cargo by awarding new contracts for LNG supply at lowest prices through spot tenders,” an official said, adding that PLL should convert expensive short- and long-term LNG supply contracts into spot purchases to save millions of dollars every month.

Officials suggested that PLL should reschedule the LNG cargoes which would be supplied by Gunvor and Eni in the winter season, when prices would be higher due to rising demand around the world.

“Current LNG prices are almost half the earlier prices and the government needs to benefit from such offers,” the official suggested. “The government should look at delaying the supply of LNG cargoes under long-term contracts, which have much higher prices, and engage in more spot purchases in order to take benefit of low prices and save millions of dollars every month.”

Pakistan is currently importing LNG from Qatar at 13.37% of Brent crude price, which is quite higher than the bids offered in the recent tender. Qatar has offered a lower price of 11.5% of crude for additional supply of 200 mmcfd.

However, experts were of the view that the price offered by Qatar was still higher.

‘Islamic values must be prioritised in education’