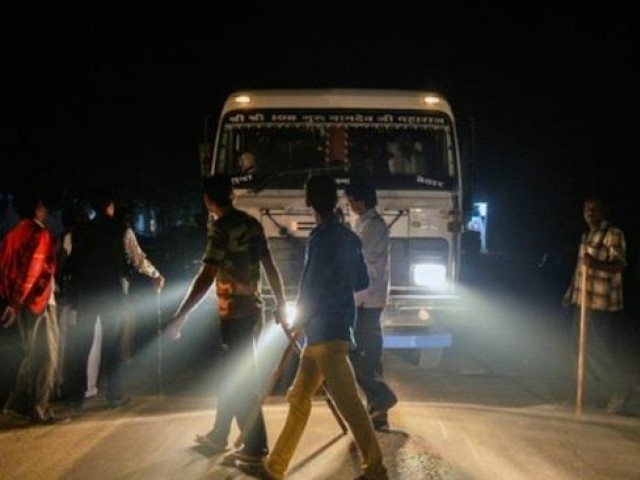 The file photo shows members of the vigilante group Gau Raksha Dal (Cow Protection Squad) inspect a truck on a highway in Taranagar in the desert state of Rajasthan, India. PHOTO: AFP

The report states that India’s “history of religious freedom has come under attack in recent years with the growth of exclusionary extremist narratives — including, at times, the government’s allowance and encouragement of mob violence against religious minorities — that have facilitated an egregious and ongoing campaign of violence, intimidation, and harassment against non-Hindu and lower-caste Hindu minorities.”

“A multifaceted campaign by Hindu nationalist groups like Rashtriya Swayamsevak Sang (RSS), Sangh Parivar, and Vishva Hindu Parishad (VHP) to alienate non-Hindus or lower-caste Hindus is a significant contributor to the rise of religious violence and persecution.”

The report also highlights the rising prevalence of mob violence in India. “Cow protection mobs engaged in violence predominantly targeting Muslims and Dalits, some of whom have been legally involved in the dairy, leather, or beef trades for generations. Mob violence was also carried out against Christians under accusations of forced or induced religious conversion.”

“In February 2018, Minister of State at the Ministry of Home Affairs Hansraj Ahir reported to parliament that 111 people were murdered and 2,384 injured in 822 communal clashes during 2017 (as compared to 86 people killed and 2,321 injured in 703 incidents the previous year),” reads the annual report.

It states that “police investigations and prosecutions often were not adequately pursued”, particularly when cases involved “mobs killing an individual based on false accusations of cow slaughter or forced conversion.”

As per the report, the Supreme Court of India last year concluded that “certain state governments were not doing enough to stop violence against religious minorities and, in some extreme instances, impunity was being granted to criminals engaged in communal violence.”

“Victims of large-scale attacks in recent years have not been granted justice, and reports of new crimes committed against religious minorities were not adequately accounted for or prosecuted.”

In conclusion, the report states, “USCIRF again places India on its Tier 2 for engaging in or tolerating religious freedom violations that meet at least one of the elements of the “systematic, ongoing, egregious” standard for designation as a “country of particular concern,” or CPC, under the International Religious Freedom Act (IRFA)”.

Trump says other countries should protect own Gulf shipping