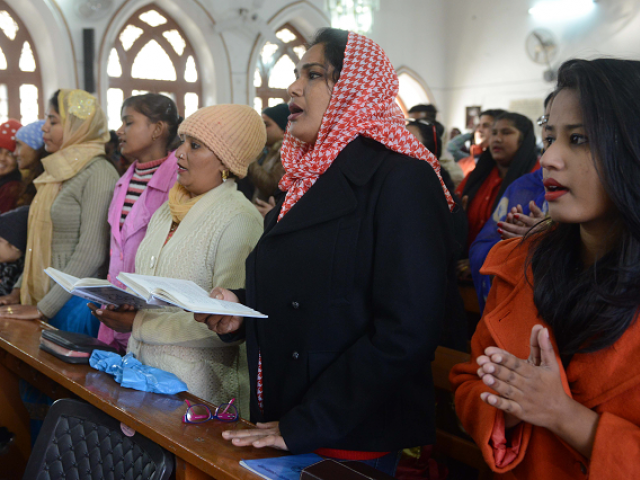 Indian Christian offer prayers during a service to mark Christmas Day at a church in Amritsar. PHOTO: AFP

KARACHI  : The vandalism of a church in Assam on December 14, just a few days before Christmas, served as a reminder of the growth of Hindu nationalism, unrest and rightwing politics in India.

The attack came exactly one month after a Catholic priest was attacked by a mob in Uttar Pradesh, and then arrested by police after Hindus accused him of “forcibly converting” Hindus. Father Vineet Vincent Pereira was conducting a prayer service in Ghohana where he was allegedly attacked by members of Hindu Yuva Vahini, a radical Hindu youth group that tries to “re-convert” Hindus that have switched religions.

In December 2017, scores of Christmas carolers around India were attacked by mobs and even arrested in some cities, for ‘trying to convert Hindus’.

“Modi would never come out and openly help them, but he rarely criticises them,” journalist and author Dhirendra K Jha said in an interview with The Guardian, adding that because of his silence, “the message goes to the state machinery is that they don’t have to take action against them.”

Indian claims of being a peaceful pluralistic nation are fading into falsehood as many of the believers of various religions in the country are living under the shadow of a surge in Hindutva terror.
The past few years have seen an unparalleled rise in violence in India by ultra-rightwing groups. The primary driving force behind the violence and terror is the Rashtriya Swayamsevak Sangh and its many offshoots.

At least 53 institutions and organisations are affiliated with RSS who have been propagating Hindutva ideology in many ways. The most notable is the Bhartiya Janata Party (BJP) — the incumbent ruling political party of India which is run by its fanatic leader, Prime Minister Narendra Modi.

Apart from BJP, various other militant RSS affiliates have been intimidating non-Hindus and all those who do not succumb to Hindutva ideology. Akhil Bharatiya Vidyarthi Parishad, Arya Samaj, Vishwa Hindu Parishad, Bajrang Dal, Shiv Sinha and Abhinav Bharat are among the Hindu fundamentalist and extremist militant organisations pursuing Hindutva ideology — resorting to “Saffron terrorism”.

Many other groups share similar ideology and methods but have no direct ties to RSS.

Will show Modi how to treat minorities: PM

According to Human Rights Watch (HRW), many senior leaders of the BJP publicly promoted Hindu supremacy and ultra-nationalism at the expense of fundamental rights for all Indians.

“Extremist groups claiming to be affiliated with the ruling BJP committed numerous assaults against Muslims and other minority communities in response [over cow slaughter allegations]. Instead of taking prompt legal action against the attackers, police frequently filed complaints against the victims under laws banning cow slaughter,” HRW said in a statement earlier this year.

“Indian authorities have proven themselves unwilling to protect minority religious communities and other vulnerable groups from frequent attack,” said Meenakshi Ganguly, South Asia director at HRW. The US International Commission on Religious Freedom (USCIRF) report of 2018 placed India in Tier 2 for “violations engaged in or tolerated by” Modi’s government.

The report mentioned grave concerns over the religious freedom conditions in India which have been on a downward trend and threatens the secular image of Indian society.

Religious minorities in India are also feeling “increasingly vulnerable” due to Hindu nationalist groups engaging in violence against them, according to the previous year’s report.

Since the BJP took power in the centre in 2014, several Indian states have begun to enforce anti-conversion laws that mandate investigations into religious conversions. These laws are only concerned about conversions away from Hinduism and create a hostile and violent environment for religious minority communities because they do not require any evidence to support accusations of wrongdoing. They also can have violent consequences. Earlier this month, Reverend Indrapal Bharati was arrested on the basis of Madhya Pradesh’s anti-conversion law.

Many others have been abducted and tortured by mobs, with the police then arresting the victims instead of mob leaders. In August, at least 271 Christians had been booked in Uttar Pradesh for “attempting to convert Hindus through the use of drugs and by spreading lies about Hinduism”. Despite being found cleared by courts, they were then booked on different charges in September.

Meanwhile, RSS “reportedly placed signs in train stations throughout India that said Christians had to leave India or convert to Hinduism or they will be killed by 2021,” according to a US state department report.

And despite the same laws, the RSS ‘Ghar Wapsi’ movement remains unchecked, as non-Hindus are being forced to convert to Hinduism.
Even former vice president of India Hamid Ansari, in a speech at the University of Bangalore in August 2017, said Dalits, Muslims, and Christians were feeling increasingly insecure. In an interview the same month, Ansari said feelings of “unease” and “insecurity” were rising among Muslims in the country.

While speaking on Media Watch on Tribune 24/7, Lenin Reguvanshi, a Dalit rights activist and founding members of People’s Vigilance Committee on Human Rights, said, “If you are progressive and a non-Hindu, you are either terrorist or Maoist. I also face the cases, when I walk in the villages. Even though I only ask for constitutional rights and peace. Cases are filed to silence us and to provide impunity to the fascist forces.”

Meanwhile, the “Modi government is sending a message that India is a global homeland for Hindus, which was apparent in the Assam’s National Registry of Citizens, where it was easier for Hindus to get citizenship as compared to non-Hindus. Modi’s government used the issue as an emotive tool to whip up hatred and xenophobia,” said Kavita Krishnan, a member of the politburo of the Communist Party of India and the editor of its monthly publication, Liberation.
“In their notion of nationhood, only Hindus belong in India. This is why the Modi government takes no action when it comes to persecution of minorities,” she said on Media Watch.

Baltimore buys back nearly 2,000 weapons from the streets