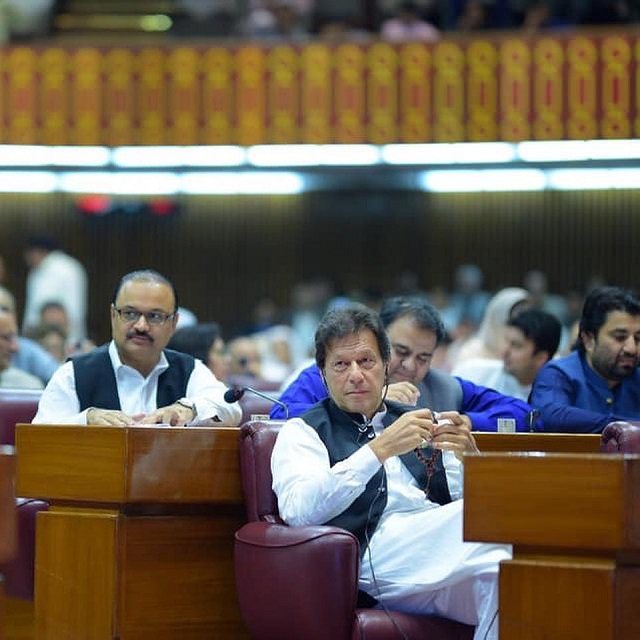 “The members of the assembly have been elected through votes and the house will not tolerate any insult to them,” he said as the assembly continued its debate on the budget on a holiday to make up for the time lost because of protests by both treasury and opposition members during proceedings earlier in the week.

Participating in the debate, Federal Minister for Planning, Development and Reforms Khusro Bakhtiar stressed the need for the government and opposition to sign a ‘charter of economy’ – a proposal recently floated by opposition leader in the house Shehbaz Sharif — to overcome the country’s financial crisis and avoid an International Monetary Fund (IMF) loan in the future.

I was quoted out of context on ‘charter of economy’: Maryam

“All parties must rise above political biases and work on the charter of economy. The recommendations of members of parliament can set a new direction for the country’s economy,” he added.

The minister said the tax targets set in the budget would lead to the stabilisation of the country’s economy.

“The government is working towards sustainable economic growth during its five years. We will create 10 million job opportunities. The tax-to-GDP ratio will be increased from 11% to 13.5%.”

Pakistan Muslim League-Nawaz (PML-N) leader Ahsan Iqbal maintained that the Pakistan Tehreek-e-Insaf (PTI) government tried to deceive the nation under the guise of austerity by auctioning off buffaloes and cars of the PM House. “In fact, the funds allocated for the PM House have been increased in the budget for the next fiscal year,” he added.

He demanded that the government should provide the details about the Rs5 trillion in loans it had taken during its 10-month tenure.

“Then the PML-N will also present itself for accountability for the Rs10 trillion loans it took during its five years of rule.”

The PML-N MNA said the ‘selected’ prime minister had pushed the country to brink of bankruptcy.

“You [the prime minister] are no longer standing on the containers of D-Chowk and should be able to put up with criticism,” he said.

“An anti-people budget was presented to procure $6 billion from the IMF. Economic development is the primary target of any budget and creating job opportunities should also be among the top priorities but the proposed budget does not focus on these objectives.”

Federal Power Minister Omar Ayub objected to the use of word ‘selected‘ for the prime minister by the PML-N MNA.

The deputy speaker, who was chairing the session, barred lawmakers from using the controversial term for the premier in the future.

Pakistan Peoples Party (PPP) leader Raja Pervaiz Ashraf maintained that his party’s founder Zulfikar Ali Bhutto and his daughter Benezir Bhutto had run their governments in even tougher times and unified the nation.

“We should ensure that criticism in politics is meant for development. You may criticise us but should refrain from ridiculing us,” he said.

Sanjrani calls on Zardari to ‘inquire after his health’