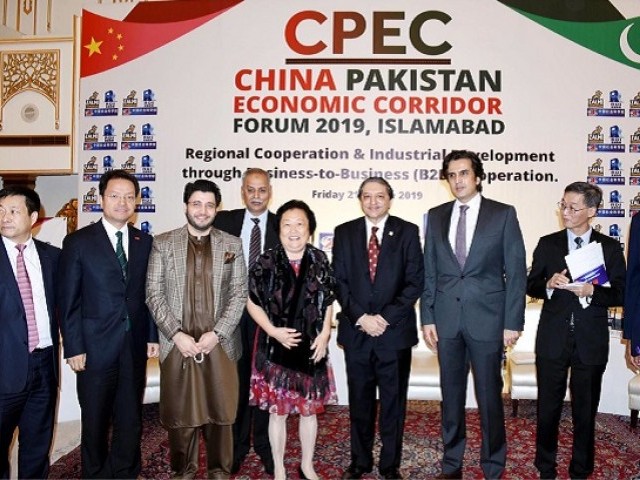 Chinese ambassador says 'we want to see Pakistan as the centre of regional connectivity'. PHOTO: ONLINE

ISLAMABAD: The speakers of a seminar have termed the China-Pakistan Economic Corridor (CPEC) extremely crucial for the economic security of Pakistan, saying there is a need to counter all challenges pertaining to the mega project, including its security and propaganda against it.

The seminar on regional cooperation and industrial development under CPEC was held a local hotel here on Friday.

Addressing the seminar, the Senate deputy chairman said, “The government will boost the confidence of businessmen which will provide better business opportunities with China. We need to resolve issues in order to boost investment. Chinese business requires government ownership. Investment will not increase until the market is stable.

“During my visit to China a few months ago, the top leadership of China gave assurances of their full support for Pakistan. We must be thankful to China for providing us opportunities of growth in economic zones. The relocation of industries will be a big milestone while the Belt and Road Initiative is also a big project. The BRI will enable fruitful linkages with all regional countries.

“The energy project in Gwadar has been completed. All political parties are on one platform when it comes to relations between Pakistan and China.”

The planning minister announced that the second phase of CPEC was about to start.
“Pakistan has been facing immense energy crisis,” said Bakhtiar. “The economic problem cannot be solved until we meet the energy demand.”

Bakhtiar said the government of Prime Minister Imran Khan was introducing reforms in various sectors.
“The infrastructure cannot improve until the social sector does. We need to expand our tax net in order to boost the gross domestic product. The government is taking effective measures for boosting exports. We want to promote our industries through cooperation with China,” said the planning minister.

“As per the plan for the second phase of CPEC, we will sign up to a free trade contract with China. Cooperation in the industrial sector will further improve relations between the two countries. We will benefit from China’s experiments conducted in various sectors. We are also receiving support from China in the livestock sector while we aim to see more cooperation from China in sectors like fishing, research and development and other fields.”

He said that in addition to the western route, work on several projects under the CPEC was ongoing in addition to the work on the eastern corridor of CPEC as well.
“Various railway projects will also be completed under CPEC,” he said, adding that the projects were also providing opportunities to the private sector. “CPEC is a great project as it promises improved contact between Pakistan and China.”

Chinese ambassador Jing said relations between Pakistan and China spanned over seven decades. “The people of Pakistan have great support for the Chinese. Pakistan is fast progressing in restructuring its policy and institutions. The private sector of Pakistan is remarkably active and can immensely cooperate with the business sector of China,” said the ambassador. “During the last six years, infrastructure projects under CPEC witnessed immense work. CPEC is playing a pivotal role in the economic development of Pakistan.”

Jing said more Chinese businessmen would visit Pakistan, which “will further boost our bilateral relations”. “Pakistan has a bright future and we want to see it as the centre of regional connectivity,” he added.
Senator Hussain said that CPEC had produced 70,000 jobs until now and there was a need to counter all challenges against CPEC.
Hussain urged the media to act responsibly regarding any fake news against the CPEC.

“CPEC is a massive strategic project which requires a one-window operation,” said the senator, adding that CPEC was crucial for Pakistan’s economic security.