Weathe­r will remain cloudy and there are chance­s of light drizzl­e over the next few days, says Met offici­al
By Our Correspondent
Published: June 21, 2019
Tweet Email 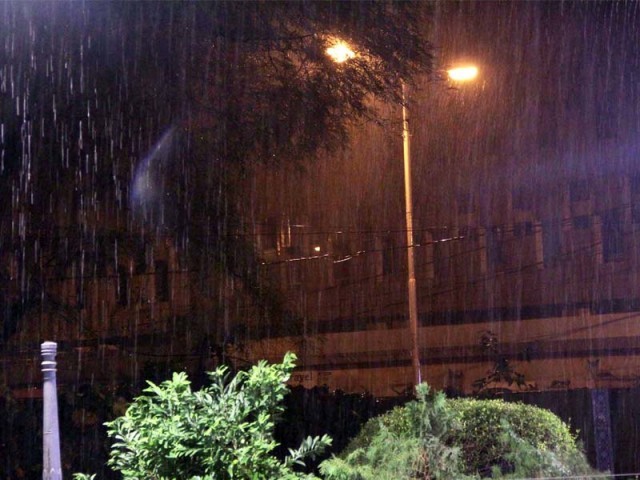 KARACHI: Citizens of Karachi breathed a collective sigh of relief as parts of the metropolis received an unexpected downpour that did much to break the hot weather streak that had persisted over the last couple of weeks.

While the Met Department had not forecast the rainfall for Friday evening, people were pleasantly surprised by the downpour amid gusty winds in various parts of the city.

The rain also caused the mercury and humidity levels to drop and turned the weather mildly pleasant. The lowest temperature recorded during the day was 28 degrees Celsius.

According to the Meteorological Department, the rain system entered the city from Lasbela, Balochsitan. The highest rainfall was recorded in Surjani Town at 2.4 millimetres (mm).

Karachi Chief Meteorologist Sardar Sarfaraz told The Express Tribune that the rainfall experienced on Friday had no connection with the monsoon season.

The rain system had originated from the south-west region of Lasbela, he said, adding that there was no further forecast of rainfall in the city. However, the weather will remain cloudy and there are chances of light drizzle over the next few days.

According to the chief meteorologist, the duration of the monsoon season in the city is between July and September.

Sarfaraz added that the metropolis will likely receive rainfall in the middle of next month.

Lights out!: Citizens forced to brave power cuts in sweltering heat in Karachi