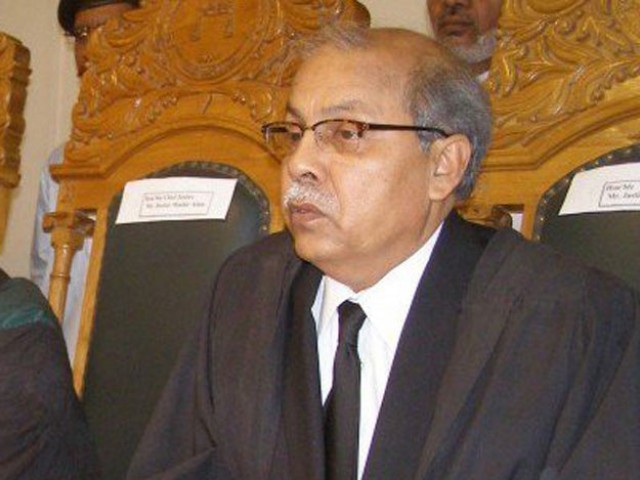 ISLAMABAD: The Supreme Court’s senior most judge Gulzar Ahmed has said Sindh province is plagued by corruption as, according to him, not a single rupee of provincial budget was spent on public welfare.

He made these remarks while heading a two-judge bench – also including Justice Mushir Alam – which on Thursday heard the Sukkur Press Club land case. The court directed Sukkur commissioner to resolve land issue of the press club, warning that otherwise he could have to face the consequences.

The commissioner said there was no place available near the current press club building. The counsel for Sukkur administration requested the court to grant 15-day time for allocation of alternative land for the press club. The bench noted that the next hearing of the case would be held at the SC Karachi Registry after a week.

During the proceedings, Justice Gulzar said the HIV has worsened the condition in Larkana and the virus could spread in whole the city if the provincial government did not took any prompt action.

He said drinking water is not available for citizens of Sukkur and people sleep without electricity. He observed that crime rate has also increased in the city due to unavailability of facilities and opportunities for the people. He said every department of the province is suffering from corruption.

Addressing Sukkur mayor, which was present in the courtroom, Justice Gulzar said it was about time he woke up. The mayor said he had made the master plan for the city and a review petition has also been submitted in this regard.

The Supreme Court also directed the federal and the provincial governments to submit details of employment quota for the persons with disabilities.

A three-member bench, headed by Justice Sheikh Azmat Saeed and comprising Justice Ijazul Ahsan and Justice Munib Akhtar heard the case regarding rights of disabled persons in Pakistan and the legislation by Khyber Pakhtunkwa (K-P) and Punjab assemblies for their employment and rehabilitation.

Justice Saeed remarked that the court had ordered all four provincial governments to recruit handicapped citizens according to their quota. He asked about development in this regard.
Punjab additional advocate general said he had submitted interim report and asked the court to grant time for submission of a concise report. He said the provincial government has appointed 4,712 special persons in Punjab.

Justice Ahsan asked about the utilisation of funds and sought details of funds on next date of hearing. Justice Saeed remarked that the matter could be sent to Anti-Corruption Department if funds are not used properly.

Opposition forms body to win over PTI’s allies against budget