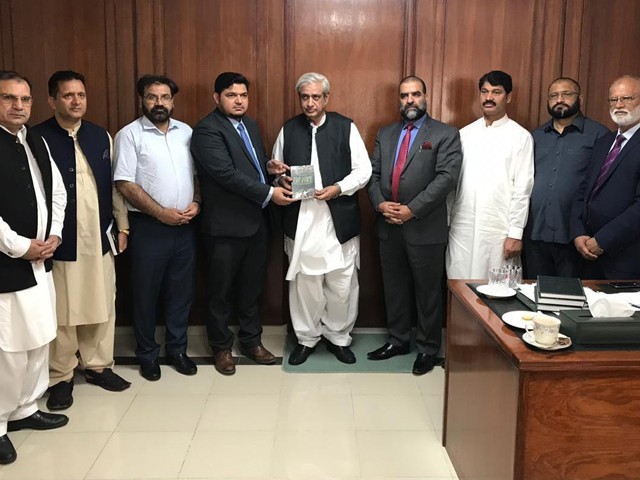 ISLAMABAD: Chairman of Parliamentary Special Committee on Kashmir Syed Fakhar Imam has hailed the role Pakistanis and Kashmiris residing in the United Kingdom (UK) have played in projecting the Kashmir issue.

He expressed these views while meeting a five-member delegation of Kashmiri leaders that called on him at his office in the Parliament House here on Wednesday.

The delegation briefed the Kashmir Committee chairman on prevailing political and security situation in the Indian Occupied Kashmir (IOK).

They also briefed him on organisations working for the Kashmir cause in Europe and the UK. The meeting stressed upon the need to establish more contacts with opinion makers, politicians and right activists across Europe about the rising human rights violations in the occupied valley.

Tehreek-e-Kashmir United Kingdom (TeK UK) president Raja Fahim Kayani gifted a book titled “Paradise On Fire” to the Kashmir Committee chairman. The book has been written on the ongoing situation in the IOK.

On Tuesday, Syed Fakhar Imam, while addressing a seminar titled ‘Post-Pulwama Kashmir Imbroglio, Modi’s Second Term, Role And Responsibility Of International Community’, had said that Pakistan’s Kashmir policy is based on resolutions passed by the United Nations (UN).

The seminar was jointly organised by Institute of Peace And Diplomatic Studies (IPD), JKSM, Jammu and Kashmir Voice of Victims (JKVoV) and TeK UK in Islamabad.

“Kashmir is and will remain the jugular vein of Pakistan and there is no room to compromise on the national Kashmir policy which maintains that Kashmiris are the main stakeholders and we will accept their decision,” he said.