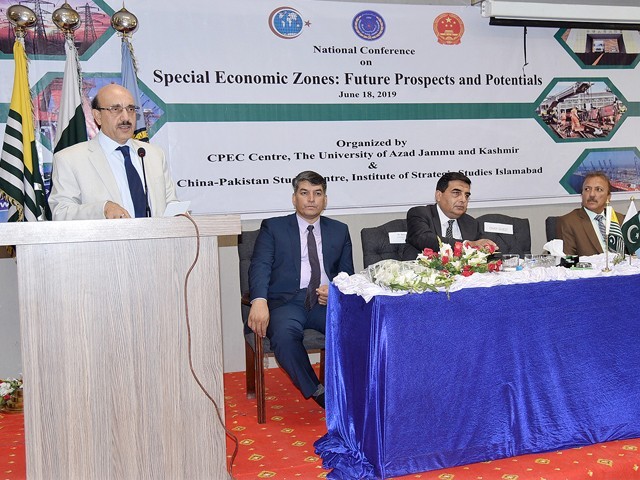 MUZAFFARABAD: Azad Jammu and Kashmir (AJK) President Sardar Masood Khan has stressed upon the need to chalk out a comprehensive strategy to turn the liberated territory into ‘economic engine’ of Pakistan through China-Pakistan Economic Corridor (CPEC) related projects.

He expressed these views while speaking as chief guest at a conference titled “Special Economic Zone – Future Prospects and Potential”, organised by CPEC Center of Azad Jammu and Kashmir University in collaboration with Institute of Strategic Studies in Islamabad on Tuesday.

President Masood said that one of the four mega CPEC projects have been completed in AJK while initial planning for two more projects has been worked out. Similarly, work on Mansehra-Muzaffarabad-Mangla-Mirpur highway would start from the next financial year, he added.

He urged universities, academia and media of the country to effectively counter-negate campaign against the CPEC initiative besides highlighting its socio-economic benefits.

Under the CPEC, nine special economic zones would be established across the country, including one in Mirpur, Azad Kashmir for which 1,185 acres of land has already been identified, said the president, adding that 571 acres of land would be acquired in the first phase and 614 acres in the second.

Sardar Masood Khan said that feasibility study including environmental study, topographic survey and other technical formalities for the Mirpur special economic zone have already been completed and handed over to the Chinese officials. Special incentives have been offered by the AJK government for investment in Mirpur economic zone, he added.

“These incentives include tax-free import of machinery and other equipment, construction of infrastructure, and permission to prospective investors to generate their own electricity to run the industries at local level.”

Qureshi underscores plight of Kashmiris on visit to UK

President Masood said the government has set up a board of investment (BOI) to attract investment by local and foreign investors as well as overseas Kashmiris, and work is in progress on a comprehensive policy to protect capital of the investors and to restore their confidence.

While enumerating challenges and difficulties, the AJK president said that planning is under way to ensure an uninterrupted supply of natural and electricity to the economic zone, setting up a dry port, introduction of e-filing system and establishing a railway link between Dina, Jhelum and Mirpur.

He said that the government was trying to ensure speedy development works in special economic zones, resolve environmental issues on priority basis, and to take on board the local industrialists and small business.

Speaking on the occasion, Prof Dr Abbasi shed light on efforts of CPEC center for the projection of economic corridor project. He also paid tributes to President Sardar Masood Khan for effectively highlighting the Kashmir issue at the OIC summit in Makkah.

A memorandum of understanding (MoU) was also signed between China-Pakistan Study Center of ISSI and the Azad Jammu and Kashmir University, under which both the institutions will cooperate with each other in the field of education and research.