This is the second 72-inch pipeli­ne to burst at Dhabej­i due to electr­icity breakd­owns
By Our Correspondent
Published: June 18, 2019
Tweet Email 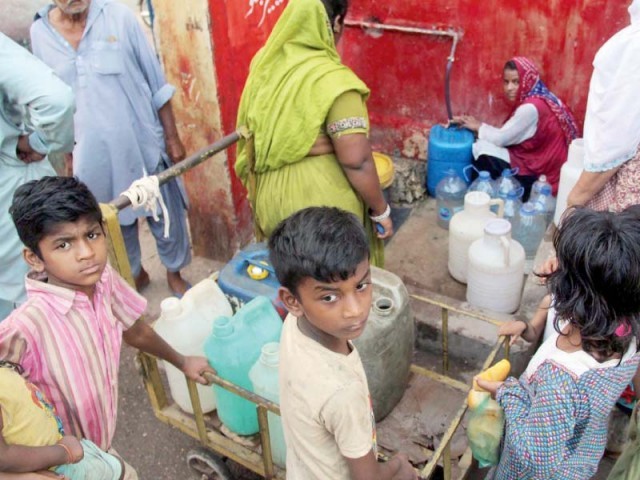 Women and children gather to collect water from a public tap in Bheempura. Water scarcity in the provincial capital remains a regular nuisance for the citizens of Karachi. PHOTO: ONLINE

KARACHI: Electricity breakdowns at the central Dhabeji pumping station have become a common occurrence. A power breakdown on Monday morning caused a 72-inch Qatar pipeline to burst. This is the second pipeline which has burst in the past four days. On Friday, another 72-inch pipeline had burst, severely affecting the water supply to the city. As 80% of Karachi’s water supply comes from the Dhabeji station, the breakdowns have worsened the water crisis in the city. Citizens’ patience is now waning and protests broke out in the city against the water crisis.

As Karachi already faces a shortage of 600m gallons of water, the recent power breakdowns and subsequent damage of pipelines has aggravated the problem. KWSB MD said that frequent electricity breakdowns have worsened water scarcity in the city.

All efforts are being made to supply water despite limited resources, he said. According to him, it will take another two to three days for the city’s water supply to resume as normal.

He advised citizens to use water with caution.

Protests have broken out in the city. Citizens claim water supply is suspended for many days. Water has become a scarce commodity, especially in hot weather, they lament.