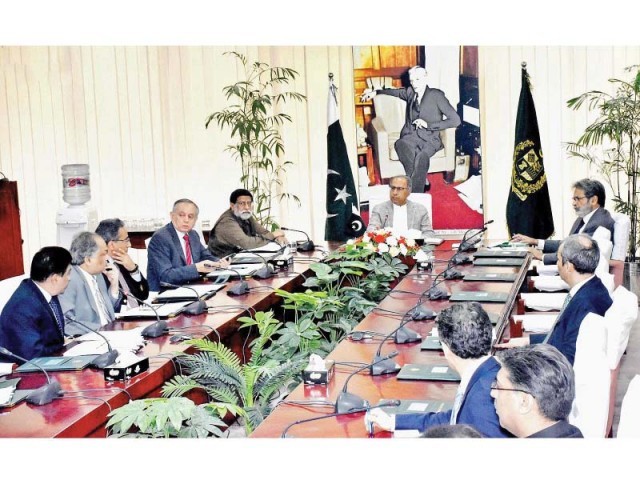 PSM has been closed for the last almost four years, but the govt is paying monthly Rs400 million in salaries to the employees - a hole that Shaikh wanted to plug at the earliest. PHOTO: NNI

Heated discussions took place during a meeting of the Cabinet Committee on Privatisation (CCOP) on the issue of delay in privatisation of Pakistan’s largest industrial unit that remains closed for the last almost four years, said officials who attended the meeting.

CCOP Chairman Abdul Hafeez Shaikh took exception to dilly-dallying approach adopted by the Ministry of Industries on the issue of PSM privatisation, according to officials who attended the meeting. The finance adviser directed the ministries concerned to fast-track the process of PSM privatisation, they added. Shaikh also directed Nadeem Baber, Chairman Energy Task Force and Special Assistant to PM on Petroleum, to propose at least one power distribution company during the next fiscal year.

Prime Minister’s Task Force on Energy has recommended putting the privatisation of power distribution and generation companies on hold until these 14 entities are restructured. It has given a three-year timeframe, which Shaikh did not approve of, said the officials.

But a heated debate took place on the issue of PSM privatisation, as Shaikh showed his displeasure over the working of the Ministry of Industries and Production.“The committee directed Ministry of Industries and Production and Privatization Commission to submit their proposals in the next CCoP,” according to a handout issued by the finance ministry after the meeting.

In October last year, the Pakistan Tehreek-e-Insaf (PTI) government had delisted the PSM from the active list of privatisation and decided to revive it. An Expert Group on PSM proposed restructuring the closed industrial complex in the public private partnership mode.

But subsequently, the Economic Coordination Committee (ECC) of the Cabinet decided to restore the PSM on active list of privatisation and directed the Ministry of Industry to hire a Financial Advisory Consortium.

The ECC had also directed the Ministry of Industries to submit a new summary before the CCOP for restoring the mills on the privatisation list. The ECC’s decision was subsequently ratified by the federal cabinet.

However, in its summary, the industries ministry proposed to revive the PSM instead of its privatisation, which annoyed Shaikh, said the officials.

The officials said that Shaikh showed his displeasure over concerned ministers’ positions that were contrary to the federal cabinet’s decision.

Although PSM has been closed for the last almost four years, the government is paying monthly Rs400 million in salaries to the employees – a financial black hole that Shaikh wanted to plug at the earliest.

The privatisation ministry took a stance that if the issue of PSM was referred to it then it would follow the recommendations given by the PSM’s financial adviser that may also include its strategic sale.

The CCOP also discussed the recommendations of the Energy Task Force. While presenting the report of the task force on energy reform, the Ministry of Energy briefed the committee about the challenges being faced by the distribution companies, stated the finance ministry.

The finance ministry said that various measures recommended by the task force for improving performance of the energy sector with a focus on reduction of losses and enhancing the efficiency of distribution companies were discussed during the meeting.

But Shaikh did not approve these recommendations and asked the Ministry of Energy to privatise at least one power distribution company in the next fiscal year, according to the officials. Shaikh was of the opinion that the three-year restructuring period was too long and during this time these entities would cause immense losses to the exchequer.

There were expectations that the privatisation programme of power distribution and generation companies may be revived after reaching a staff-level agreement with the International Monetary Fund (IMF) for a $6 billion bailout package.

In December, CCOP had linked the privatisation of these nine power distribution companies and five power generation companies with recommendations to be given by the Prime Minister’s Task Force on Energy.

The committee directed the Ministry of Energy to submit proposals aimed at accelerating closure of those GENCOs that have outlived their recommended life and are running into losses, according to the official handout.