After the countr­y saw some of the bigges­t protes­ts of recent years during Sunday's vote
By AFP
Published: June 13, 2019
Tweet Email 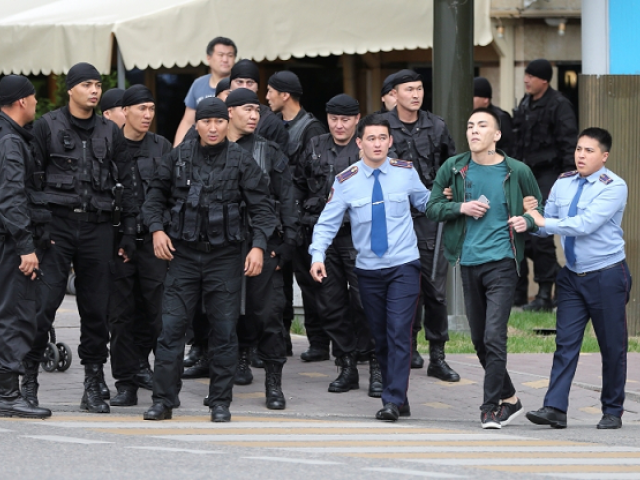 Law enforcement officers detain a man during an opposition rally held by critics of Kazakh President Kassym-Jomart Tokayev, who protest over his election in Almaty, Kazakhstan June 12, 2019. PHOTO: REUTERS

NUR-SULTAN, KAZAKHSTAN: Kazakhstan on Thursday said nearly 1,000 people have been handed jail terms or other penalties for taking part in protests over the presidential election in the ex-Soviet country.

The Kazakh prosecutor-general’s office said 957 were found guilty of offences, 670 of whom were jailed while others were fined or given warnings.

The country saw some of the biggest protests of recent years during Sunday’s vote and following the victory of a hand-picked successor to former strongman Nursultan Nazarbayev, Kassym-Jomart Tokayev.

The protesters were found guilty of taking part in in illegal demonstrations and disobeying police, the statement said.

Saparbek Nurpeisov, an official at the prosecutor-general’s office was quoted as saying that protesters “succumbed to provocations, began demonstrations and started attacking law enforcement officers.”

On Sunday, police arrested some 500 protesters in Almaty and the capital Nur-Sultan as demonstrators urged a boycott of what they said was a fixed election. Two AFP journalists were detained but later released.

On Monday, hundreds more were arrested at protests as Tokayev was inaugurated in polls that foreign monitors criticised for “voting irregularities.”

The protesters had called for the cancellation of election results.