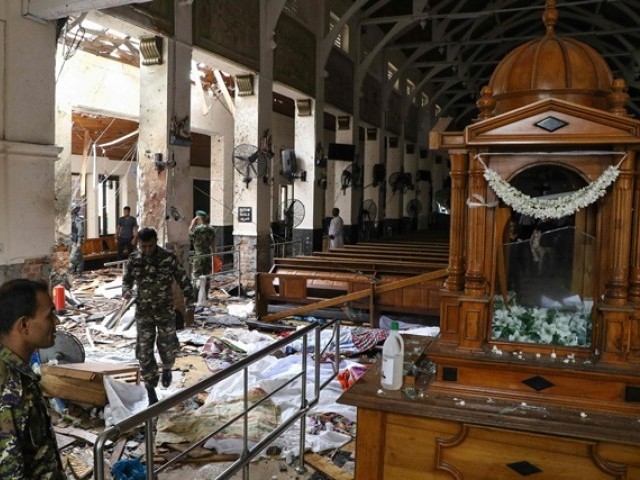 Sri Lankan security personnel stand amid blast debris at St Anthony's Shrine following an explosion in the church in Kochchikade in Colombo on April 21. PHOTO: AFP

The comments by Azath Salley, who quit last week as governor of Western Province, added to evidence of massive security failings before the April 21 attacks that killed 258 people.

Salley told the Parliamentary Select Committee (PSC) that he repeatedly told President Maithripala Sirisena to take action against the group.

Salley said the former government of Mahinda Rajapakse in office until 2015 funded Thowheeth Jama’ath through military intelligence, a practice continued by the new administration.

Salley said that the funding was to spy on other groups.

Salley also said that a week before the attacks, he met with top defence officials to warn them about the activities of radicals and impending dangers.

“If the police had taken action on the information I provided at the time, we would have been able to avoid this disaster,” he said.

The PSC has already heard from several top defence and police officials that the authorities failed to implement an effective security plan even after receiving precise warnings of an impending attack.

Sirisena sacked his national intelligence chief Sisira Mendis after he told the PSC that the attacks could have been averted.

Mendis also said the president had failed to hold regular security meetings to assess the threat from Islamic radicals.

His defence secretary and police chief have suggested that the president, who is also defence minister, did not follow proper protocols in dealing with intelligence warnings about the bombings.

Sirisena has refused to cooperate with the PSC and told his senior officers not to testify. However, parliament warned civil servants that they risked up to 10 years in jail if they ignored summons.

Broadcasts of proceedings have however been halted.

Sirisena has repeatedly denied he was aware of an impending threat. He suspended police chief Pujith Jayasundara and dismissed his top defence official Hemasiri Fernando after the bombings.

Modi to avoid Pakistan airspace despite getting permission