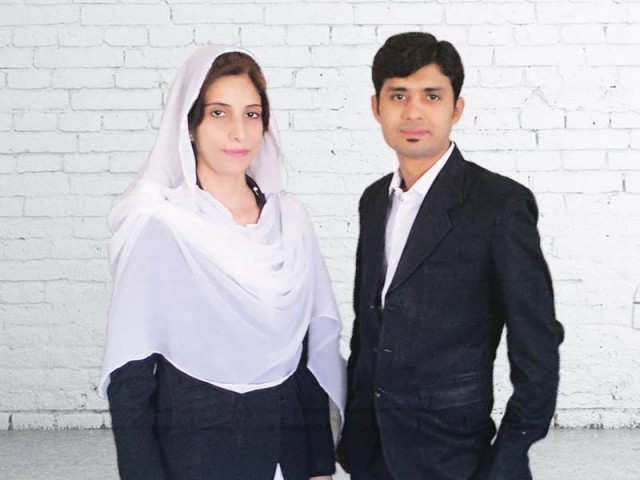 KARACHI: Strangers often mistake 28-year-old Daina Kumari and 29-year-old Suneel Kumar for siblings. Such is the deep love and respect the two have for each other, a bond borne out of the Hindu rite of Raksha Bandhan.

But it is not just mere rakhi that binds the two Hindu youngsters. Talented and highly motivated, they have for years shared the same dream to one day become civil service officers.

It is this dream that drove Daina and Suneel into leaving their hometown of Jacobabad, a sweltering hot city that rarely makes the news for good reasons, for Karachi. And now, five years of hard work and determination seems to have finally paid off. The duo has successfully passed the public service commission exam, with Daina going on to become a judge and Suneel joining the Sindh Police as an inspector.

“Before moving to Karachi, we both completed LLB degrees in our hometown and also co-authored three books,” Suneel said, adding that one book is about “multi-dynamic verses” in English poetry, and two are on human rights issues. During their preparation for competitive exams, they were also pursuing masters degrees, eventually completing LLMs from Sindhi Muslim Law College.

The strength of Daina and Suneel’s bond can be measured from the fact that they had almost identical life schedules at school and university, and went to the same library to prepare for CSS. The two even co-authored a research paper during their masters degrees on ‘evolution of human rights and measures for protection against violations’.

“We initially appeared in CSS, but did not qualify,” Suneel said, adding that they did not lose hope and appeared in the Sindh Public Service Commission exams for the position of inspector (law) in the police. Both qualified, but Daina had also taken part in the commission exam for civil judge in 2017 and had been waiting for the result. “It was an utter surprise for me. Soon after I qualified for the inspector position in October 2018, my long-awaited result for civil judge was also declared. I had two orders in my hands and eventually decided to become a judge,” she said.

Daina is now the third female judge from the Hindu community after Kanwal Kumari of Thar and Suman Pawan Bodani of Kamber Shahdadkot district.  After assuming her job as a civil judge in the Malir area of Karachi some months ago, she is currently on a training course.

Daina got her early education from Jacobabad. After intermediate she got a BSc, an MA in English, and an LLB from Haji Moula Bux Law College, Shikarpur and started a small law practice under the supervision of her uncle, Karam Chand Kingrani, a former additional and sessions judge.

According to her father Lachman Dass, “politics is in their family’s blood and law is their passion”.

“My grandfather was chairperson of the Jacobabad Local Board in 1923. He started Nari Shala Training School for Women and established Sindhi Medium School in Jacobabad in 1924,” he said, adding that his grandfather also served as president of the Hindu Panchayat.  “I have also served as president of Samaj Sujagh Sangat, a social forum at local level for community development,” he said.

Like Daina, Suneel, also belongs to a lower-middle class Hindu family. His parents run a small business in Jacobabad.  Soon after his intermediate exams, he appeared in a test for deck cadet officer in the merchant navy and qualified in 2009. He visited more than 24 countries as a cadet, but quit to pursue a government position. Although he is too old to try for the CSS again, both rakhi siblings plan to appear in the upcoming exams for additional sessions judges and also hope to pursue doctorates at some point.

“Since our school days, we have had the same interests and worked together. For a short while, we have had separate professions, but in the future, we hope to again join the same field and continue our struggle,” both reaffirmed.