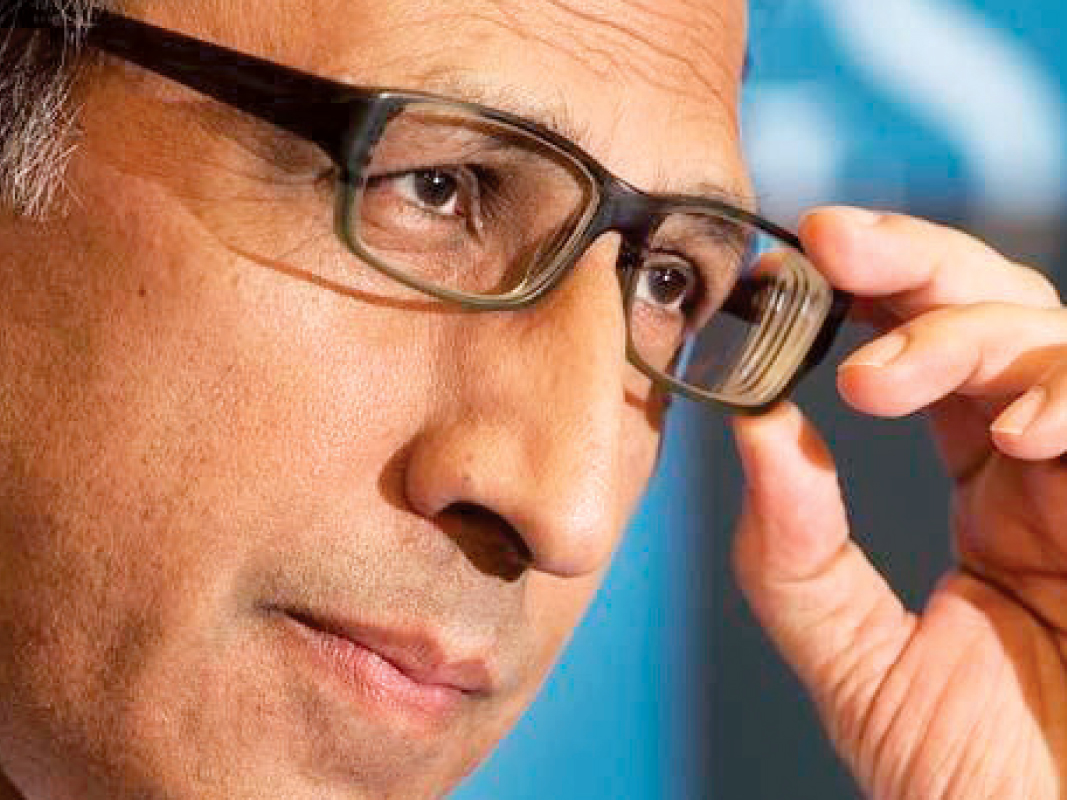 ISLAMABAD: The first Economic Survey rolled out by the Pakistan Tehreek-e-Insaf (PTI) government on Monday struck all the bad notes as is evident from the data which shows that all economic indicators have missed their targets by a wide margin.

Adviser to the Prime Minister on Finance, Revenue and Economic Affairs Dr Abdul Hafeez Shaikh also set the tone for the future direction of the government’s economic policies by saying that the country was heading towards a default if chronic imbalances were not addressed in the budget to be announced today.

The Economic Survey of Pakistan 2018-19 carried the tale of missed targets, and the adviser, for the first time in the country’s recent history, did not read out its salient features. He instead spent his time criticising the previous governments of the Pakistan Peoples Party and the Pakistan Muslim League-Nawaz.

Shaikh did not talk about Prime Minister Imran Khan’s economic performance in its first year — apparently distancing himself from the policies of his predecessor.

The adviser also confessed that the rich were not ready to pay taxes and the country’s nearly half of the government’s tax receipts were going for debt servicing, leaving nothing behind for investment. 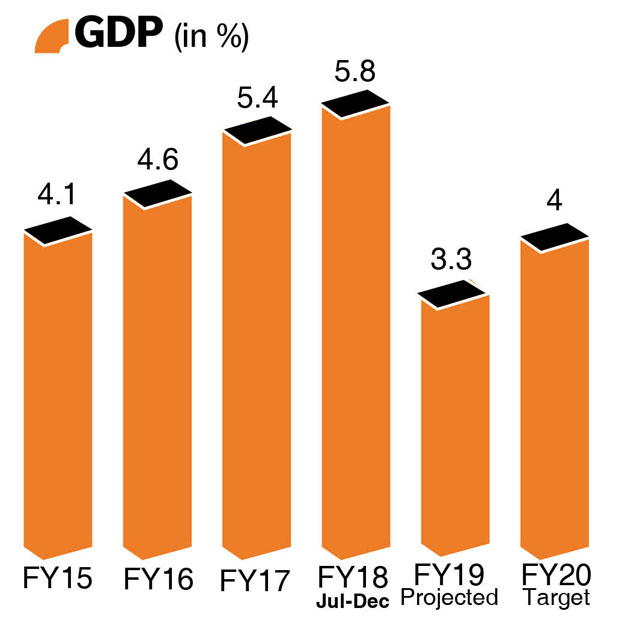 The prime minister had claimed that due to clean image of the PTI, people would voluntarily pay their taxes.

The country’s economic growth rate slowed down to 3.3% — the lowest in nine years — that was almost half of the annual target of 6.2% because of negligible growth in the agricultural and industrial sectors.

“It is correct that the targets have not been achieved, but everybody knows how these targets are set and also the government is following stabilisation policies”, said Shaikh while responding to a question.

The outgoing fiscal year’s economic results have confirmed that the country’s structural problems remained unaddressed. The size of the economy shrank to around $280 billion in dollar terms from $315 billion a year ago. The economy could not create sufficient jobs to absorb the youth bulge.

Per capita income also slipped to $1,497.3 during the outgoing fiscal year from $1,652 a year ago, and income inequality widened, according to the Economic Survey of Pakistan.

The finance adviser regretted that Pakistan did not have capacity to repay the nearly $100 billion foreign loans, as there was nil increase in debt bearing capacity due to stagnant exports during the past ten years.

“This is an important issue which threatens Pakistan’s economy and we are highly exposed to foreign loans and foreign exchange which is not matched by our capacity to pay it back,” said Shaikh.

“The twin deficits are standing in front of us, economic challenges are enormous and if we do not tackle them we are heading towards default,” said Shaikh while making a pitch for the toughest ever budget that he would unveil on Tuesday (today).

Against the target of 4.9% of GDP, the budget deficit was expected to hit 7.6% or Rs2.9 trillion by the end of this fiscal year.

Shaikh said that out of the Rs5.550 trillion projected revenue target about Rs2.9 trillion will be spent on paying interest on debt in the next fiscal year alone.

The adviser said he was not here to play the blame game, but stressed that necessary reforms to boost exports have not been taken.

He admitted that rising prices would erode the political capital but insisted that it was necessary to address the macroeconomic challenges.

Shaikh said institutions like power, gas, steel, PIA, railways and insurance, etc., have all been hollowed out over the years. They have been looted systematically over an extended period of time. Shaikh said that indebtedness of these state enterprises has reached to Rs1.3 trillion in accumulated losses.

Shaikh said people would see we are ready to impose fiscal discipline, balance our revenues and expenditures and live within our means.

To a question about the negotiations between Pakistan and the IMF turning into a case of IMF versus IMF due to State Bank Governor Dr Reza Baqir’s previous stint with the fund, Shaikh said he has not heard a more bogus argument in his life.

“It was not fair that those who cannot even become zonal cricketers are criticising test cricketers,” said Shaikh while taking a jibe at his critics.

Shaikh said Reza Baqir left a lucrative IMF job at our request and returned to Pakistan to take on this difficult role. “We should welcome him.”

The per capita income is worked out by dividing the total national income with the number of people.

The investment-to-GDP ratio stood at just 15.4% against a target of 17.2%, according to the survey. The ratio was worse than last year’s revised rate of 16.7%.

The government’s inability to increase investment as a percentage of the total size of the national economy remains its biggest failure on the economic front, suggesting that the PTI government has not yet begun its journey towards addressing structural imbalances.

Private investment that had been recorded at 10.3% of GDP in the last year has also slipped to 9.8%.

The government had a target to increase private investment to 10.8%. Public investment also shrank to 4% of GDP — down from 4.8%, due to steep cut in development spending by the federal and provincial governments.

After witnessing a 4% growth rate in the last fiscal year, the agricultural sector only grew 0.85% this time, as the government missed all its sub-sector targets except livestock.

The government had set a target of 3.8% growth in the agricultural sector for this fiscal year.

The production of major crops contracted by 4.4% and other crops also saw a negative growth of 6.6%. Cotton ginning grew at a pace of less than 2%. 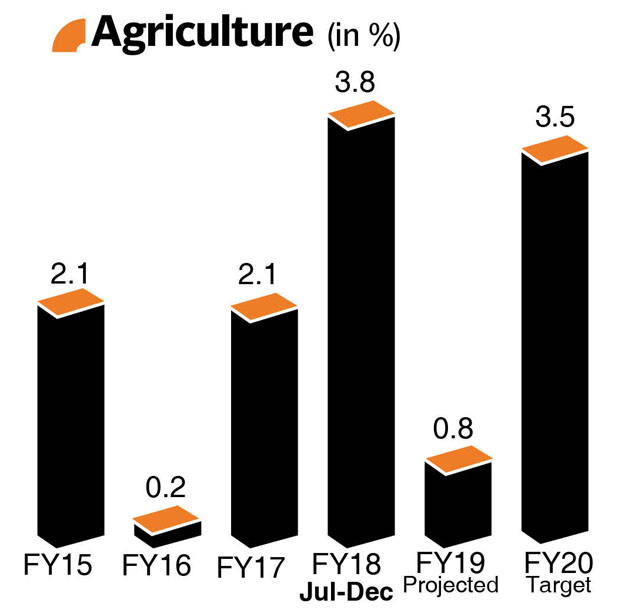 Livestock posted a 4% growth rate and the forestry sector grew by 6.5% but could not meet its target. The fishing sector grew by only 0.8% against the 1.8% target. 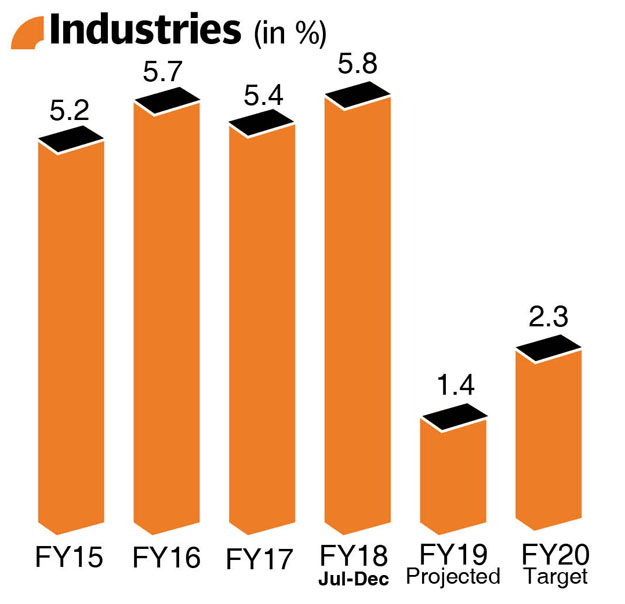 The services sector, which accounts for 60% of the size of the economy, grew by 4.7% against the target of 6.5%. Aided by heavy government borrowing and an increase in the money supply, the financial services sector and government services posted a decent growth. 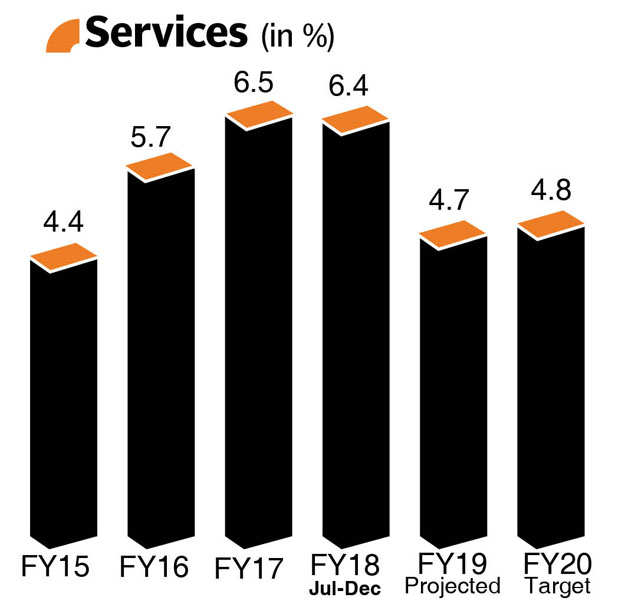