Spania­rd says 'you can't be frustr­ated becaus­e your neighb­our has a bigger house, or a bigger TV or better garden'
By AFP
Published: June 10, 2019
Tweet Email 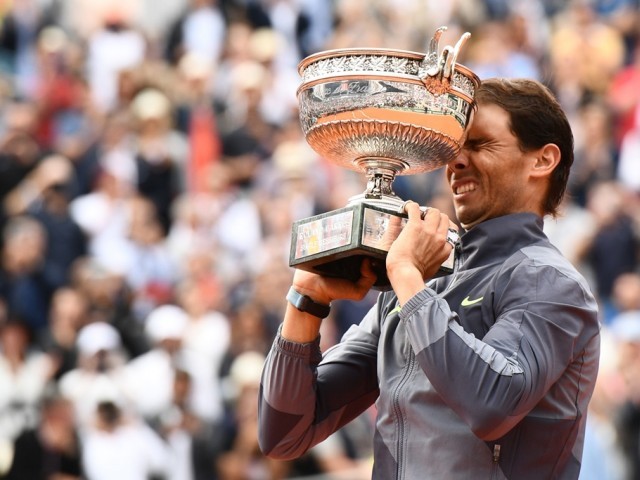 DIFFERENT GOALS: Nadal is the best part of five years younger than Federer but with a career blighted by injuries, he refuses to target the all-time record. PHOTO: AFP

Rafael Nadal insists he is not obsessed with beating Roger Federer’s record of 20 Grand Slams, claiming “you can’t be frustrated all the time because your neighbour has a bigger house than you or a bigger TV or better garden”.

That took him to 18 majors, just two behind Federer.

At 33, Nadal is the best part of five years younger than the Swiss veteran but with a career blighted by injuries, he refuses to target the all-time record.

“That’s not the way that I see the life,” said the Spaniard. “It’s a motivation, yes, but it’s not my obsession. It’s not what makes me get up every morning or go and train and play.”

Nadal’s caution is well-founded. By his own estimates, his career-long battles against knee and wrist injuries have cost him “around 15 or even more Grand Slams”.

In the aftermath of his latest Roland Garros triumph, he admitted that after an injury-hit start to 2019, he felt “down mentally and physically” and questioned his love for the sport.

“I was not enjoying it too much, I was worried about my health. I was down mentally and physically after Indian Wells,” said Nadal. “I was too negative. After Madrid and Barcelona, I was thinking about what I needed to do. I could stop for a while and recover or change my attitude and recover.”