To check the endura­nce of the equipm­ent on Mars’s harsh atmosp­here
By Tech Desk
Published: June 10, 2019
Tweet Email 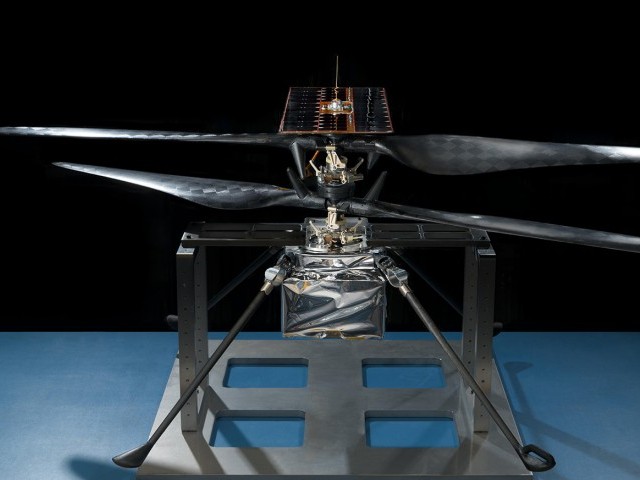 This image of the flight model of NASA's Mars Helicopter was taken on Feb. 14, 2019, in a cleanroom at NASA's Jet Propulsion Laboratory in Pasadena, California. The aluminum base plate, side posts, and crossbeam around the helicopter protect the helicopter's landing legs and the attachment points that will hold it to the belly of the Mars 2020 rover. Image Credit: NASA/JPL-Caltech

NASA is almost for the Mars 2020 mission which will begin next year in July. Mars 2020 Rover is one of the most sophisticated equipment to be set to the Red Plant will also be equipped with a helicopter.

Called Mars Helicopter, has passed several test runs to check the endurance of the equipment on Mars’s harsh atmosphere and has is now in the final testing phase at NASA’s Jet Propulsion Laboratory.

“Nobody’s built a Mars Helicopter before, so we are continuously entering new territory,” said MiMi Aung, project manager for the Mars Helicopter at NASA’s Jet Propulsion Laboratory in Pasadena, California. “Our flight model – the actual vehicle that will travel to Mars – has recently passed several important tests.”

Mars 2020 Rover will carry the copter on its belly during its flight and will deploy the helicopter once it lands on the Mars.

As of now, Mars Helicopter does not have a specific purpose, but scientists at NASA are hoping that it will send some valuable information about the thin atmosphere of Mars. Equipped only with a high-resolution camera, NASA is hoping to get some aesthetic photos of the Red Planet.

As Rovers are relatively slow NASA might use helicopter-like vehicles for its future mission to Mars as they are quicker and easier to manoeuvre in the rough Martian terrain. NASA can rapidly explore new areas on Mars if the Mars Helicopter test run goes according to plan.