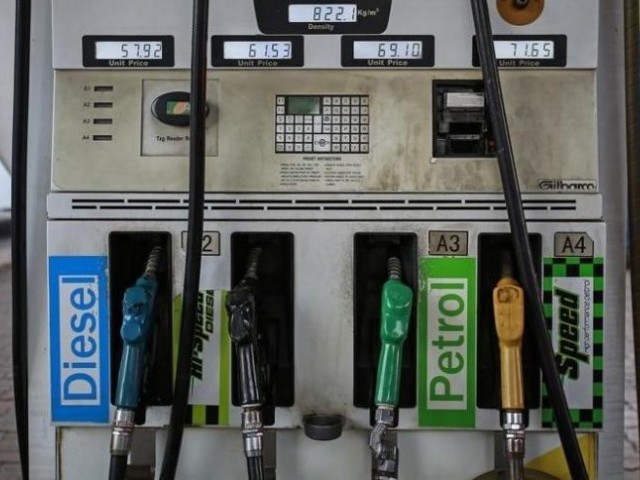 ISLAMABAD: New prices of petroleum products effective June 1 have been announced. Petrol price is now at Rs112.68 per litre, high-speed diesel (HSD) at Rs126.68 and kerosene oil at Rs96.77.

There is an increase of Rs4.26 in petrol price, Rs4.50 in diesel price and Rs1.69 in kerosene oil price. The main reason for the increase appears to be the adjustment in the rupee-dollar parity.

Prices could have been higher if full general sales tax (GST) had been charged. GST has been set at 13% for petrol and diesel instead of the standard 17%.

On the other hand, prices could have been lower if the petroleum levy was charged at a lower rate. It appears that the government prefers to charge less GST which is shared with provinces while the petroleum levy is not divisible. Unfortunately, full GST has been charged on kerosene, which is a poor’s fuel.

We will present some reform proposals with the aim of reducing the burden on the poor and low-income groups.

A difference in prices of petrol for the rich and poor has long been on the policy agenda of administrators, governments and policy intellectuals. Recently, a number of commercial fuel products have been introduced with different RON ratings and other commercial claims with varying prices. The government has also deregulated such prices.

A question arises if there can be multiple products in the higher range for the upper class of vehicles owned by the rich and well-to-do, why can’t there be a similar product and price differentiation for the lower side. The difficulty is that both price and product characteristics have to be different, otherwise there will be misuse of lower prices.

RON rating, a characteristic for enhancing anti-knock properties and pick-up of vehicles, can differentiate between fuels. Cars, especially of newer models, require higher RON (92 to 95) petrol while older cars and especially motorcycles can run on much lower RON (82-87) petrol.

Lower RON does not mean poor quality of petrol. RON enhancement requires expensive metal additives, which have been a matter of controversy. Thus, RON 82-87 petrol can be introduced in the market without fear of misuse by the higher income people driving newer models and requiring high RON.

Reportedly, some stakeholders from the motorcycle industry have opposed the proposal. However, the new product is not meant to be mandatory. It would be the choice of the consumer, if he prefers the more expensive higher RON product, he can do so.

It has been estimated that motorcycles have a market share of 50% in petrol consumption. As it is, this market segment should be brought on a par with the cars category in importance.

At present, more facilities and attention is paid to cars by marketing companies and dealers. In fact, there is a case for introducing exclusive petrol pumps for this segment. Cheaper and less space consuming stations and filling points can be established.

There are containerised concepts also, which can be shifted according to congestion and space availability.

RON 87 product can be introduced at a substantially lower price and this price difference can be partly passed on to conventional and high RON petrol and partly covered through tax reduction. It is realised that a large subsidy or reduction is not feasible in the current circumstances.

We are proposing only a small reduction in GST from 17% to 13% and shifting the petroleum taxation load to the conventional petrol.

It is possible to introduce the proposed product at a lower price of Rs96 per litre as opposed to the existing price of Rs112.68.

Simultaneously, the price of higher RON product will go up to Rs131.6, which will be affordable by the higher income group having expensive cars.

By comparison, the petrol price in New Delhi is 156 Pakistani rupees per litre. This is the lowest price among all regions. In Mumbai, the price is Rs164 per litre.

The proposed scheme of things offers achievement of another desirable objective in petroleum pricing. In Pakistan, unlike many other countries, the diesel price has been higher.

Diesel is consumed by public and goods transport, and affects the cost of products and competitiveness. If we leave the HSD price and its taxation the same, the difference between the two will go away and possibly HSD can be priced lower than petrol.

Kerosene is consumed mostly by the poor. Its price can be reduced by charging less GST at 13% instead of the standard 17%. Also, the petroleum levy may also be exempted.

The market of kerosene is much smaller than that of petrol and diesel and thus a major fall in government revenue may not occur due to this reduction. If the proposed is done, kerosene prices can be brought down to Rs86.6 per litre instead of the current Rs96.77.

There is a case for subsidy to this sector which, however, may not be feasible under the present circumstances. However, it should remain on agenda till the circumstances permit.

Petrol and other fuel prices are increasing due to the recent rupee depreciation and other inflationary reasons. It is vital to bring policy innovations for reducing the burden from the lower income group and transfer it as much as it may be feasible to the higher income groups.

All policy changes and innovations have consequences. Consequences should be measured and mitigation should be introduced. Inaction or rejection of new approaches is not an option.