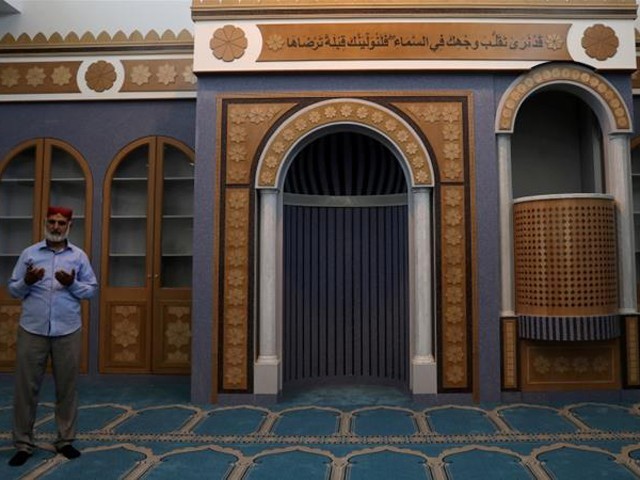 A Muslim man prays inside the first official mosque in Athens. PHOTO: REUTERS

ATHENS: Athens’ first official mosque since the establishment of the Greek modern state two centuries ago is set to open most likely by this September, Greek Minister of Education, Research and Religious Affairs Kostas Gavroglu said during a visit on site.

Construction of a mosque has been a constant request of Muslims living in the overwhelmingly Christian Orthodox Greece for decades, but conservative circles raised obstacles on multiple occasions in the past.

Following a marathon battle with Greek bureaucracy, as officials noted on Friday, the mosque was eventually constructed in a central district of the Greek capital.

It has been fully funded by the Greek state.

“The Greek state has done anything possible to safeguard the right of all people to pray in sites of worship of their choice,” Gavroglu told media on Friday after inspecting the place with representatives of the Muslim communities in Greece.

“Almost all parties in the Greek parliament voted in favour of its construction. Democracy spoke and her wish was respected,” he said, pointing to far-right extremists who objected the construction and vandalised the site recently.

“We have been waiting for many years. At last the mosque has become a reality. We wish peace for Greece,” Zaki Mohamed, the mosque’s imam said.

Although the construction has been completed, there are still pending minor technical issues for the safe operation of the mosque, members of its governing body explained.

“We are in a pre-election period and (under Greek law) procedures for the hiring of civil servants needed for the mosque, have stopped,” Haider Asir explained speaking to Xinhua.

“It will take a little more time so that we are entirely ready for the launch of the mosque’s operation,” said Nelly Papachela, Vice Mayor of the Municipality of Athens.

“We are feeling very proud. This is a historical day… There are more than 250,000 Muslims living and working respectfully in Greece,” said Sayed Mohammad Jamil, president of the Greek-Pakistani Cultural Welfare Society.

So far Muslims in Greece who have increased in recent years due to migration and refugee flows had been praying in dozens of unofficial mosques. There are more than 60 operating across Greece for the Pakistani community only, Jamil told Xinhua.

Gavroglu said on Friday that the Greek state is trying to accelerate the procedures also for the construction of a Muslim cemetery at a Piraeus port suburb.