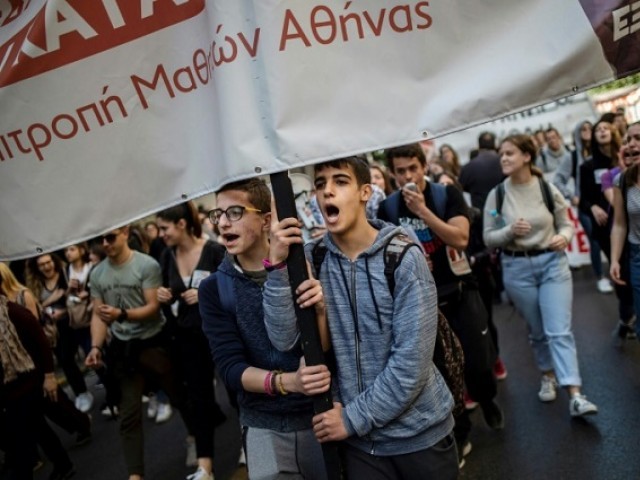 As she ponders her future abroad, Greek university graduate Alexandra is unsure she wants to vote on May 26 for an EU structure she holds responsible for ravaging her country after its debt crisis.

Meanwhile, 20-year-old Erasmus student Thanassis suspects that Greece was a “testing ground” for EU austerity policies but still believes the bloc “has a lot to offer.”

In a country where the minimum salary is 650 euros ($728) and youth unemployment is around 40 percent, young Greeks have an ambivalent relationship with the European Union.

“On the one hand, the connection (with Europe) is stronger, the exchanges and friendships more numerous. But on the other, young Greeks are living through a difficult situation that is directly linked to Europe”, said Ioannis Kouzis, a social policy professor at Athens’ Panteion university.

“Some 350,000 Greeks emigrated during the crisis, including many youths who could not find adequate job opportunities here,” Kouzis said.

Only 54 per cent of Greeks believe their country has benefited from joining the European Union in 1981, according to an October 2018 survey by the European Parliament.

The Greek crisis erupted in 2010 after its fiscal deficit was revealed to be several times over official figures.

To avert bankruptcy, successive Greek governments were forced to adopt a barrage of spending cuts and tax hikes in return for three European bailouts — two of them with additional funds from the International Monetary Fund.

Greece exited its last bailout in August, but lost about a quarter of its national output amid countless layoffs and business closures over the past decade.

The Organization for Economic Cooperation and Development found that in 2018, nearly 40 per cent of Greeks aged 15 to 24 were unemployed, compared to a European average of 15.2 per cent.

The son of civil servants, Thanassis knows about job and salary cuts, growing up in Kozani, an industrial region hit hard by the crisis.

But “despite the mistakes… more Europe and more solidarity (is needed) to stand up to the spectre of the extreme right,” he said.

Thanassis will spend the third year of his international relations degree programme in Brussels, and considers the Erasmus programme “the best of Europe’s policies.”

But with Greeks being portrayed as lazy and wasteful in European coverage of the crisis, spending time abroad has not been easy for many.

Elina, who left Athens in 2010 to study architecture in London, said she faced “a lot of racism” and decided to return after five years to launch a design brand.

“You may feel more integrated than previous generations because (we) travel more and speak several languages, but you are bombarded with stereotypes about the laziness of Greeks,” she told AFP.

As to whether she felt European, she replied: “Do the Europeans consider us European?”

Alexandra said she doesn’t think decision-makers in Brussels are listening to people like her.

“I’d like to be able to feel that I have the same opportunities as the rest of EU citizens in member states. But that’s not the case,” she said.

Alexandra hopes to have more luck in Germany “to make a living and begin adult life.”

Though still the lowest in Europe, the sense of European citizenship in Greece has nevertheless made some progress. It stands at 51 percent according to a June 2018 report by the European Commission.