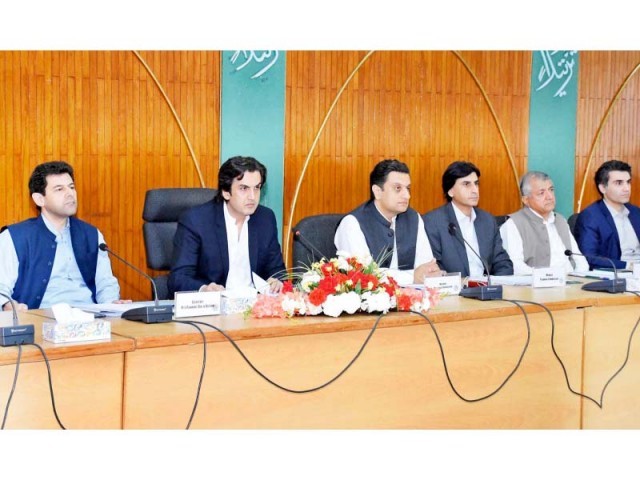 The secretariat will be responsible for overall coordination and implementation of CPEC work, according to the presentation that the acting project director gave to the CDWP. PHOTO: FILE

ISLAMABAD: In a major development, the government has taken the first step towards establishing the China-Pakistan Economic Corridor (CPEC) Authority and approved the merger of existing support infrastructure into a new secretariat.

Project director of the new CPEC Secretariat is likely to be somebody with military background, said a top official of the Ministry of Planning and Development on Friday.

Headed by Minister for Planning and Development Makhdoom Khusro Bakhtiar, the Central Development Working Party (CDWP) approved the merger of two ongoing projects to set up the CPEC Secretariat and an authority. The government merged the CPEC Support Project and the CPEC Centre of Excellence.

Against the existing mechanism where a deputy project director had been heading the CPEC Support Project for the last three years, now the minister for planning and development will head the CPEC Secretariat. The number two in command will be the planning secretary.

The project director, who will be responsible for all operational and policy matters of CPEC, will be hired in the Management Pay Scale-I, which is also equivalent to grade-22.

The project director will head two wings – the coordination and monitoring wing and the research wing – and will enjoy vast powers, according to the concept paper of the new CPEC Secretariat and the authority.

In order to keep the matter secret, the Ministry of Planning and Development did not prepare a new working paper for approval of the revised PC-I by the CDWP. The deputy project director only gave a presentation to the CDWP. The planning ministry also did not mention the CPEC Secretariat in its official statement.

Planning Secretary Zafar Hasan and Planning Minister Bakhtiar did not comment on the need for CPEC Authority.

The secretariat will be responsible for overall coordination and implementation of CPEC work, according to the presentation that the acting project director gave to the CDWP.

The secretariat will coordinate activities for conducting meetings of Joint Working Groups (JWGs) and Joint Cooperation Committee (JCC) and implementation of the decisions taken by these two forums.

JWGs have representation from both China and Pakistan and these groups thrash out technical details of projects for approval by the JCC. JCC is the highest joint decision-making body of CPEC.

The secretariat will also be responsible for coordination with local and international institutions and think tanks for preparing policies and conducting research. It will provide a mechanism for multi-sector coordination and ensure consultative process for trade support and policy formulation, according to terms of references of the new secretariat.

In 2014, Pakistan and China had announced that they would deepen their economic and strategic cooperation through CPEC, which is the pilot project of the trillion-dollar Belt and Road Initiative of the Chinese president. Initially, both the countries had announced $46 billion worth of agreements in infrastructure and energy sectors. The volume subsequently increased to $60 billion.

However, a couple of years ago, CPEC started hitting roadblocks and it is now estimated that the actual Chinese investment in the energy and infrastructure projects will not cross $24 billion, according to documents of the Ministry of Planning and Development.

The presentation of the new CPEC Secretariat showed that CPEC’s scope has been enhanced to trade and market access. The subjects of industrial development and global value chains have also been brought under the scope of CPEC.

Gwadar Oil City, regional connectivity and third-party participation have also been shown as part of CPEC, according to the presentation.

In addition to new hiring, the existing staff of both the CPEC Support Project and the Centre of Excellence will be retained by the government. There will be one deputy project director whose post may be re-designated as director general, depending on his professional background.

The government also plans to hire six specialists, also in the MP-1 scale, for areas of energy, transport infrastructure and Gwadar, investment and industrial business, socio-economic and agriculture, finance and media. These people will be responsible for monitoring and implementation of CPEC.

The planning ministry has estimated the total cost of running the CPEC Secretariat at Rs2.6 billion for five years.