On World No Tobacc­o Day, WHO urges people to quit now and say no to second-hand smoke
By By News Desk
Published: May 31, 2019
Tweet Email 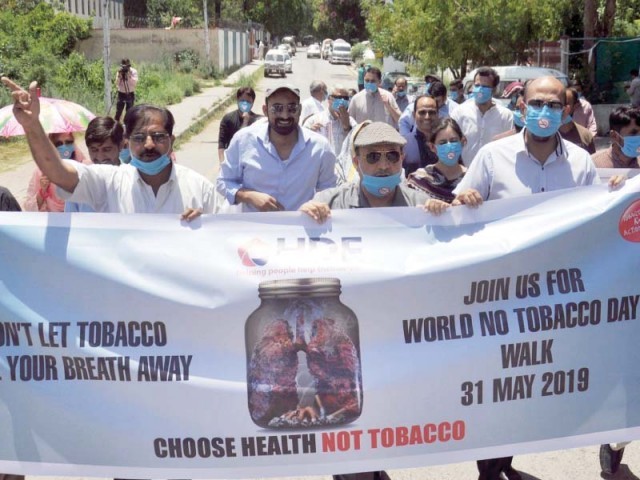 On the eve of this year’s World No Tobacco Day, the World Health Organisation (WHO) is calling on people protect their lungs by not only quitting tobacco smoking but also saying no to second-hand smoke.

Enough scientific evidence is available to prove that tobacco is harmful in all its forms and disguise. It kills over 8 million people every year. Tobacco smoking and second-hand smoke can cause lung cancer, chronic obstructive pulmonary disease, asthma and tuberculosis. Tobacco smoke in itself is a very dangerous form of air pollution.

“Stop tobacco from taking your breath away. Tobacco kills one person every 4 seconds. Do not be that person and do not contribute to the death toll,” says Dr Palitha Mahipal, WHO Head of Pakistan.

He said tobacco is deadly in any form or disguise. Tobacco killed 100 million during the last century and if current trends persist, tobacco, by the end of this century, will kill a billion people or more unless urgent action is taken.

Dr Palitha said that a recent high level WHO mission on tobacco taxation held extensive technical discussions with the Federal Bureau of Revenue, met with high ups and advocated for an immediate elimination of the third-tier and enhanced tobacco taxation and we would see it happening. “We have high hopes that the Prime Minister Imran Khan and our health minister will leave no stone unturned to protect the health of the people.”

Tobacco has a negative impact on lung health

Tobacco smoking is the primary cause for lung cancer, responsible for over two thirds of lung cancer deaths globally. Tobacco smoke contains over 7000 chemicals, at least 69 of which are known to cause cancer. Second-hand smoke exposure at home or in the work place also increases the risk of lung cancer. Additionally, tobacco smoking is the leading cause of chronic obstructive pulmonary disease, a condition where the build-up of pus-filled mucus in the lungs results in a painful cough and agonizing breathing difficulties. The risk of developing chronic obstructive pulmonary disease is particularly high among individuals who start smoking at a young age, as tobacco smoke significantly slows lung development. Tobacco also aggravates asthma, which restricts activity and contributes to disability. Furthermore, tuberculosis damages the lungs and reduces lung function, which is further exacerbated by tobacco smoking.

Alarm bells in the Eastern Mediterranean Region including in Pakistan

As per Global Adult Tobacco Survey that was conducted in Pakistan in 2014, the current adult tobacco smokers and smokeless tobacco users were 12.4 % and 7.7% respectively and exposure to second hand smoke was 48.3 %. On the conservative estimates keeping in view the increase in population, tobacco attributable deaths may amount to 227,000 per year.

“Smoking among young people is particularly worrying,” says Dr Ahmed Al-Mandhari, WHO Regional Director for the Eastern Mediterranean. “It has reached 42% in boys and 31% in girls”. This includes smoking shisha, which is more popular among young people than cigarettes. “By 2025, smoking is expected to rise in the Eastern Mediterranean Region, contrary to the trend in the rest of the world,” explains Dr Al-Mandhari. “This will lead to an escalating epidemic of lung disease regionally”.