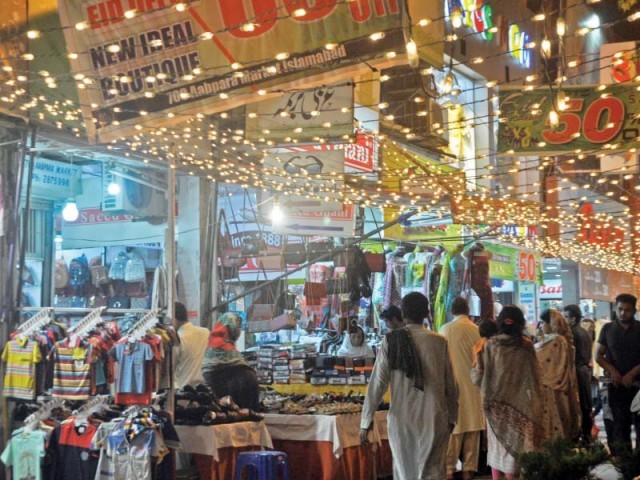 ISLAMABAD: Islamabad Police have deployed 500 policemen at important places, shopping centres, main markets from this week till the eve of the Eid or Chand Raat for the maximum safety and convenience to the public.

Eid shopping will be at peak in Capital during the on-going week when people would be headed to markets in droves with bundles of cash in the night, which adds up to the risk of mugging and robbery.

In view of the situation DIG (Operations), Waqar Uddin Syed has directed to beef up security arrangements and ensure effective patrolling as well as vigilance in the city.

On their special instructions, the police spokesman said that Additional SP Hassam bin Iqbal has devised security deputing police contingents at all important places, shopping centers, main markets for the safety of the public.

Police Commandos have been deployed at different places apart from patrolling by ASPs, DSPs, Inspectors, and provision of more strength to police stations. All the Police Stations have been directed to ensure foolproof security arrangements in their respective areas.

More than 500 policemen in form of various teams headed by Zonal DSPs, Inspectors, beat officers will be deployed in the whole districts. In the main markets and shopping centers, policemen would perform security duties from 4 pm to 12 am.

DSPs will overall supervise security arrangements in their respective areas and to report Zonal SPs regarding policing measures. Lady police, Lady Commandoes will also perform security duties in the markets while police vehicles will ensure patrolling in the assigned areas.

Policemen in plain clothes will also perform duties at busy shopping centers to keep a vigilant eye on car lifters and criminals while special ACLC teams will also patrol in the various areas besides special checking at entry as well as exit points of the city.

Additional SP said that all Station House Officers would maintain close coordination with other police wings for ensuring elaborate security.

Special police deployment will be also ensured at Blue Area, Super Market, Jinnah Super Market, sectors F-6, F-10 and F-11, I-8 Markaz, I-10, G-10 Markaz, Faizabad, Aabpara market while police reserves will remain to stand by for assistance in case of any untoward situation.

While chairing a meeting of SHOs and Muharram (report writers) of all police stations, DIG Waqar directed police officers of the district to increase the security of the mosques, start crackdown against beggars, and control street crime, besides strict checking on entry and exit points of the city.

All officers should deal with the public with a good attitude and resolve their problems on a priority basis, he said. “Promote community policing. Keep people in contact and get information from them,” he told the meeting which was held on directions of Islamabad IGP Muhammad Aamir Zulfiqar.

DIG Waqr said that security guards and watchmen performing duties in various markets should be considered part of the force and compolete coordination should be maintained with them so that they could provide you information anytime.

Police have been put on high alert in the last 10 days of Ramazan when people spend nights in mosques. Police have decided to maintain high vigilance besides enhanced patrolling measures in the city.

DIG Waqar directed to ensure foolproof security arrangements during last Ashra of Ramazan and maintain close coordination with the mosque committees and also furnish the list of faithful sitting in I’tikaf during the last Ashra.

He directed to put in place special security arrangements to avert any untoward incidents at the sensitive worship places. He said that special security should be made for the last Ashra of Ramazanul Mubarak and directed to enhance patrolling in Islamabad Capital Territory to ensure a safe environment for the citizens.

It was also decided to intensify the campaign against professional beggars and not to allow gathering of beggars outside the worship places.

The DIG (Operations) directed all the SHOs to remain in contact with the mosque committees of their areas round the clock and extend full cooperation to them with regard to beefing up security of worship places.

He also appealed the citizens to keep vigilance eye on the suspected elements and inform police in case of any suspicious activity around them. He asked to maintain coordination with security guards performing duties at markets and other places so that they may share any important information with them related to security.