Beating the heat, one innovation at a time

Beating the heat, one innovation at a time

KARACHI: The city of lights is often plunged into darkness thanks to load-shedding and power breakdowns. More and more of Karachi’s residents opt for UPS and generators. However, increasing inflation means these are not always viable options. Added to this is the hot weather, exacerbated by climate change, forcing people to come up with alternative solutions to beat the heat and also save energy. Amjad Ahmed, a 39-year-old inventor in North Karachi has come up with a solution. He claims to have created an energy efficient battery operated ceiling fan.

In 2015, Karachi witnessed one of its worse heat waves. Moved by the casualties of that fatal summer, Amjad began working on a design for a battery operated ceiling fan. After three years of persistent efforts, he succeeded in creating a ceiling fan which can work on solar energy or by using a small battery and a charger. He claims his product will consume 50% less electricity than the average fan operating on UPS.

Energy efficient
A common ceiling fan uses 75 to 95 watts of electricity while the average use of two fans in the summer takes up more than half of the electricity used by the entire house. This is why electricity bills are twice as much in the summer than in the winter.
Amjad says his fan will work at the same speed as an average fan powered by electricity from the grid. It can also operate using a small 100-ampere battery and a charger. Compare this to the UPS, which gives only three to four hours of electricity after being charged once, it will save 50% more electricity.

An average ceiling fan uses 100 units of electricity in the summer and accordingly, a single fan costs around Rs700 to Rs800.
This inventor claims that the average consumer can save up Rs9,000 a month by using his design. It would also help in saving electricity for industrial and production purposes and reduce the burden of subsidies for electricity on the government. 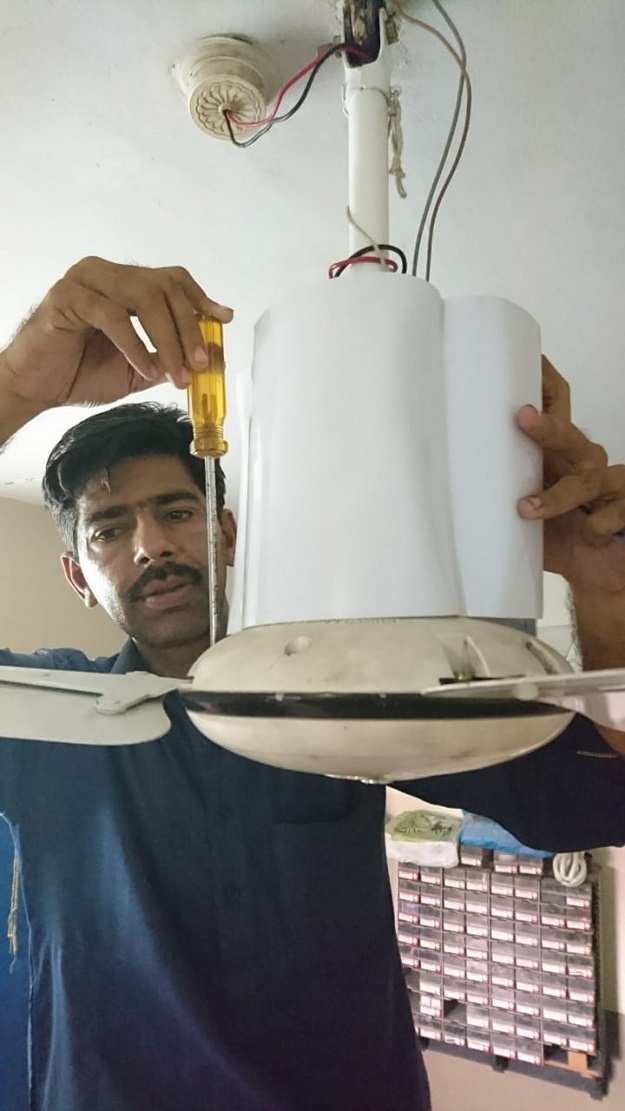 How it works
Amjad’s product works in two ways. It can operate on solar energy, whose installation cost is Rs50,000, from 9 am to 5 pm. According to Amjad, this money would be compensated by the decrease in electricity bills of three years as the rate per unit will decrease along with the decrease in the number of units used. The ratio of taxes applied would also be less. Secondly, a 100-ampere battery could power two such fans and a 200-ampere battery would power four such fans, using no electricity from the grid. The second option would be more viable than a UPS as while a 250-ampere battery charged with a heavy UPS would only power three fans at the same time for an hour, Amjad’s product would allow four fans to work on optimum speed for three hours powered by a 200-ampere battery.

Set to launch
Amjad plans to install his design in the mosques of Karachi in the first phase in order to reduce their spending on electricity bills, particularly in the summer. He has approached various mosques in the city and many have agreed to try his technology. Amjad claims his design can be tested at any level and at any time.

Not his first
Amjad started working on battery operated bracket fans seven years ago when load-shedding in Karachi was at its peak.
He collected old parts from Shershah Kabari Market and invented his own fan which would work for two to three hours when fully charged.
He says his product was well received but cheaper copies flooded the market, dissuading him from expending more of his time and energy in developing the product. The inexpensive copy of a battery operated fan was low quality in comparison to his design. But battery operated fans gained traction in the country and the import of rechargeable fans also increased.

His design, despite being more durable, could not survive in the market due to the abundance of low cost and substandard alternates.
He did, however, manage to make around 200 bracket fans which are functional to this day. He succeeded in selling them in rural areas of Sindh but was discouraged from investing more of his time and energy in the product as he could not compete in the market.
It was the 2015 heatwave and the fact that low-income families who purchased his fans were becoming increasingly burdened by inflation and subsequently high electricity bills. Such families urged Amjad to come up with a similar solution with ceiling fans so that the extremities of hot weather could be easier to deal with.
Safeguarding intellectual property
According to Amjad, the absence of copy rights and intellectual property rights protection has caused national level loss as far as inventions are concerned. When a talented inventor presents a solution after spending several years and his life’s earnings, the credit of the technology should be given to him. Stealing and copying ideas is a trend in Pakistan unfortunately and he experienced the same seven years ago.

Introducing fake and copied products is easier as attaining copy rights is a complicated process for inventors, he says. Besides, consumers stop trusting good quality solutions because of their experience with cheap copies. This discourages inventors further.

His new design is the result of efforts of over three years paying off. Adamant not to be ripped off again by others copying his design and producing substandard copies, Amjad is completing legal formalities to get his invention protected under the relevant copy right and patent laws and it is not an easy process, he says.