Three-day tourna­ment will kick off on July 7
By Ihtisham Bashir
Published: May 24, 2019
Tweet Email 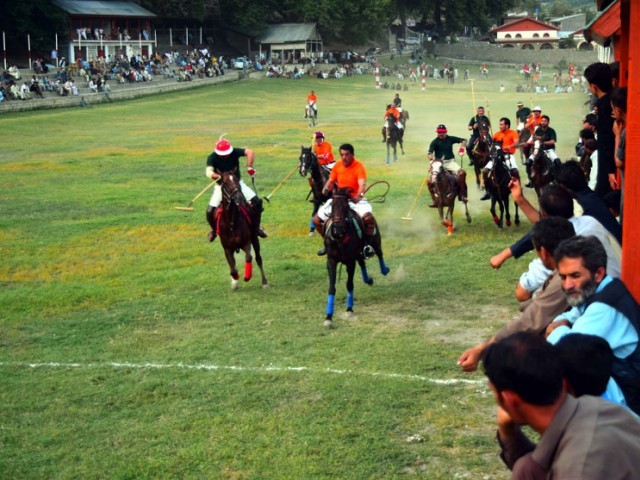 PESHAWAR: With the government relaxing legal requirements for foreigners hoping to visit arguably the world’s highest polo tournament, the provincial tourism department is hoping for a large turnout of foreign tourists to this year’s tournament.

The Khyber-Pakhtunkhwa (K-P) government has decided to hold the three-day annual event from July 7 at the famed Shandur Pass in Chitral district.

A high-level meeting of the K-P Tourism Cooperation (TCK-P) was held on Thursday to review arrangements for the festival.

During the meeting, the dates of the festival were finalised. The grand final of the tournament, it was decided, will be held July 9.

Polo in Pakistan has improved: Losada

In order to attract a greater number of tourists to the area, it was disclosed that the precondition of obtaining a no-objection certificate (NOC) from the provincial government has been withdrawn.

“This year, the number of foreign and domestic tourists will be great as compared to past years because complete peace has been restored in the province while the condition of acquiring NOCs for international tourists has already been withdrawn,” Rehman said, adding that the government will provide boarding and lodging facilities to both, foreign and domestic tourists.

Speaking to The Express Tribune, TCK-P Managing Director Junaid Khan, elaborated on the arrangements being made.

“Special arrangements for women, children and families [are being made] to seat them in enclosures,” he said, adding that a tent village will be erected to house visitors.

To ensure the safety and security of the tourists, special security contingents will be deployed around the tent village.

“Special arrangements will be made for the foreign tourists in the area,” Junaid added.

Rehman pointed to the recently concluded Chilimjusht festival in the Kailash Valley of Chitral which was attended by a large number of foreign tourists.

Just as in the Kailash festival, he said that the Chitral district government, the police, army, Chitral Scouts, and other institutions will extend their full support to hold the Shandur Polo Festival peacefully.

In this regard, the tourism secretary said that the concerned departments have been directed to take steps for renovating the polo ground, ensure water supply, arrange transportation, hold meetings with stakeholders and provision of other facilities to the participating teams, fans and tourists.

Apart from the polo, Junaid said that they have made arrangements for a host of activities for visitors including a special night gathering, fireworks, paragliding, rafting in the Shandur lake, kite flying, archery, and cultural nights of Chitral and Gilgit.

Moreover, special food outlets will be set up around the tent village.

“Local artisans and skilled entrepreneurs will be provided with an opportunity to showcase their products including food stalls, traditional music and dances and adventurous activities in the gala,” Rehman added. He hoped that the festival will provide an opportunity of great thrill and enjoyment to tourists, spectators and fans of the polo game.