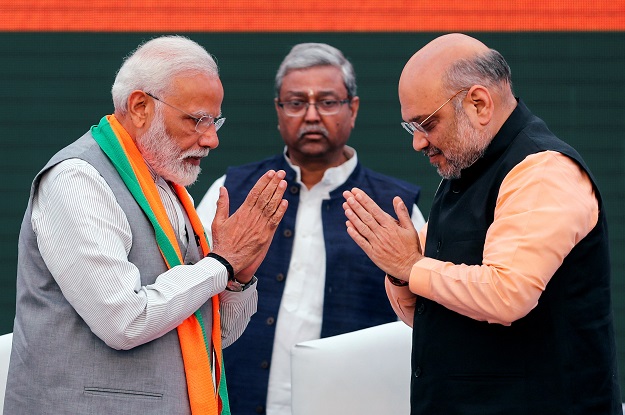 NEW DELHI: Indian Prime Minister Narendra Modi scored a dramatic election victory on Thursday, putting his Hindu nationalist party on course to increase its majority on a mandate of business-friendly policies and a tough stand on national security.

His re-election reinforces a global trend of right-wing populists sweeping to victory, from the United States to Brazil and Italy, often after adopting harsh positions on protectionism, immigration and defence.

Although final results were yet to be published, a rolling vote count by the election commission showed the BJP increased its majority with 302 out of 543 elected lower house seats. Its main rival, Congress was ahead on just 51 seats.

The BJP-led National Democratic Alliance’s (NDA) predicted margin of victory, at 348 seats versus 85 for the Congress-led United Progressive Alliance, according to broadcaster NDTV, far exceeds survey forecasts in the run-up to the vote.

That would give Modi’s party the first back-to-back majority for a single party since 1984 and make him the first non-Congress leader to become prime minister for two successive tenures. “Together we will build a strong and inclusive India,” Modi said on Twitter. “India wins yet again!”

In an added personal humiliation, Gandhi, 48, lost in the northern constituency of Amethi, which the family has held almost continuously for the last four decades, to former television star Smriti Irani, who is running for the BJP. However, Gandhi was leading in the southern constituency.

In the populous northern state of Uttar Pradesh, the BJP was leading in 60 of the 80 seats in the fray. It was also leading in 19 of 42 seats in West Bengal, where it took on the Trinamool Congress, surpassing the two it won in 2014, data showed.

Delirious supporters of Modi banged drums and smothered each other in saffron paint as they celebrated BJP’s landslide victory. Supporters carried effigies of Modi, bearing the slogan “singham returns” (the lion returns) in the streets across the country.

Modi was showered with rose petals when he arrived at the party headquarters to announce victory as rain started to fall. He is expected to hold a victory parade in the holy city of Varanasi, which he represents in parliament.

“We had sought mandate for a New India. I bow down before the 1.3 billion countrymen on this occasion. I thank the Election Commission of India and the security personnel for carrying out the entire election process peacefully,” Modi said, addressing supporters at the party headquarters. 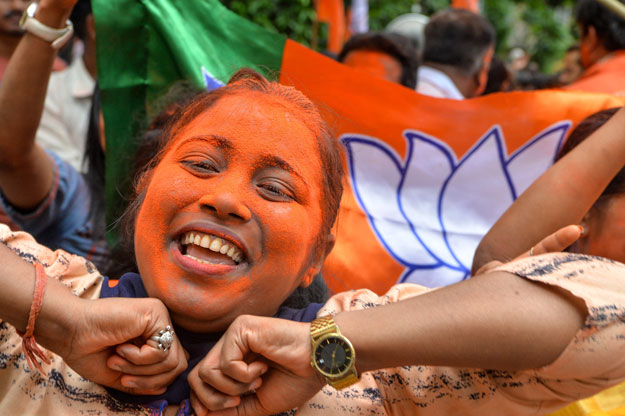 He was accompanied by BJP president Amit Shah, who is credited with forging strategic alliances with smaller parties across different states thereby ensuring BJP victory. Speaking on the occasion, Shah said that the BJP had secured more than 50% of the total votes polled in 17 states.

Earlier, Modi vowed an “inclusive” future for all Indians. “Together we grow. Together we prosper. Together we will build a strong and inclusive India,” Modi tweeted. “The faith placed in our alliance is humbling and gives us strength to work even harder to fulfil people’s aspirations,” he said.

On the contrast, the Congress office was a near ghost town. By midday as it became apparent that Gandhi’s party had suffered a severe drubbing. “The result was unexpected,” said a Congress spokesperson Salman Soz. “We have to go back to the drawing board and see what went wrong.”

During his first term, Modi was seen as dividing force. Critics says extremists were emboldened by the BJP’s coming to power with increasing lynching of Muslims and low-caste Dalits for eating beef and slaughtering and trading in cattle.

Under the Modi-led government, several cities with names rooted in India’s Muslim past have been renamed, while some school textbooks have been changed to include references to Hindu right-wing ideology, culture and history.

However, the 68-year-old prime minister managed to deftly turn the election into a referendum on his rule, while depicting himself, often in the third person, as the only one able to defend India in the face of mounting challenges.

But his return to the power for another five years, instilled a sense of resignation among Muslims, particularly in the northern town of Ayodhya, where Modi’s party has promised to build a temple at the site of a mosque raze by Hindu zealots in 1992.

Hindu groups have said they would now press Modi on their demand for a Ram temple on the Ayodhya site, life in jail for killing cows – considered sacred by many Hindus – and ending the autonomy of Indian-occupied Kashmir (IoK).

Investors welcomed Modi’s victory, hoping his government will push through reforms. Indian stocks surged more than 5% this week to hit record highs on Thursday, but the euphoria fizzled quickly, with stocks and the rupee ending the day weaker, as the focus returned to a faltering economy.