Lack of awareness, quacks to blame for HIV outbreak

Lack of awareness, quacks to blame for HIV outbreak

The recent outbre­ak of HIV in Larkan­a was not an unprec­edente­d incide­nt, says Dr Shah
By Rija Fatima / Tufail Ahmed
Published: May 15, 2019
Tweet Email 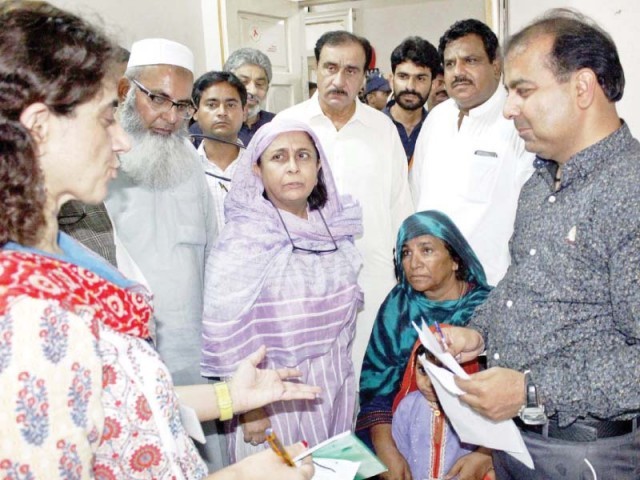 Dr Azra Pechuho enquires about the health of patients during her visit to Chandka Medical College Hospital in Larkana on Tuesday. PHOTO: PPI

KARACHI: Medical camps, established across the province to detect HIV and AIDS cases, have become a source of anxiety to the public, instead of alleviating their problems. Owing to the lack of awareness and qualified doctors to tackle the disease, the public is left to fend for themselves.

The number of HIV cases is on the rise in Sindh. In addition to the previously registered 10,500 HIV and AIDS patients, hundreds of new cases have emerged in the province, straining the healthcare system. According to experts, unsafe sex, reuse of syringes and unsafe blood transfusion are the root causes for the spread of the virus.

Human Immunodeficiency Virus (HIV) is known to jeopardise the immune system. People infected with the virus suffer from extremely compromised immunity. Consequently, the virus can transform into Acquired Immune Deficiency Syndrome (AIDS). After diagnosis of the disease, anti-retroviral therapy (ART) drug is administered to control its progression.

While speaking to The Express Tribune, Dr Sharaf Ali Shah, the former Sindh AIDS Control Programme manager and an expert on HIV and AIDS, shared that the first outbreak of the virus occurred in Larkana in 2003 among drug users who use syringes while the second outbreak occurred in 2016 among dialysis patients. In the recent outbreak of HIV, children are the most affected.

Diagnostic camps set up in the province by Sindh government and Sindh AIDS Control Programme are conducting screening tests for HIV. The screening for AIDS is conducted by the World Health Organisation. Those who test positive for the virus are left to their own devices to find treatment and coupled with lack of awareness, this becomes a source of anxiety and depression for the poor.

Dr Shah said that the recent outbreak of HIV in Larkana was not an unprecedented incident. Stressing on the weakness of the country’s healthcare system, he said that public and private institutions need to improve their performance. He added that awareness campaigns should be launched by the government to educate people about preventive measures and treatment options. Such campaigns can greatly help curb the HIV cases, he opined.

He said that the Sindh government must establish more testing centres with trained and qualified staff, besides appointing the Sindh AIDS Control Programme manager on the basis of merit. He said that untrained and inexperienced staff was one of the reasons for the growing number of HIV cases in the province. Only competent and experience staff can effectively deal with the issue, he added.

Dr Shah said that the government should also raise awareness among doctors about safe use of syringes and how to safely carry out blood transfusions. Those infected by the virus, he added, should undergo pre-test and post-test counseling to ensure that they do not fall prey to anxiety and depression.

A medical university and childcare hospital is already established in Larkana but there is a dearth of qualified and competent doctors who could treat the disease.

Sindh AIDS Control Programme Manager Dr Sikandar Memon confirmed that 337 people have tested positive for HIV in the screening conducted since April 25 this year. Unfortunately, 356 of the patients are children. He said that of the 116 samples taken from people in Shikarpur, none tested positive for HIV. He added that there were three registered HIV patients in Khairpur who have been undergoing treatment while cases have also surfaced in Mirpurkhas and Karachi.

A few days ago, the health secretary inaugurated Chandka Medical College Hospital in Larkana in which a special ward has been set up for treatment of HIV and AIDs. After registration of new cases, the hospital will treat the patients through tests and medicines. A ward has also been equipped with machines for CD4 tests, he added.

Earlier on Monday, the Pakistan Peoples Party Chairperson Bilawal Bhutto called a meeting on Monday to discuss the HIV epidemic that has gripped the province.

In the meeting that continued for three hours, Health Minister Azra Pechuho shared the latest statistics for HIV in Larkana, as reported by the Sindh AIDS Control Programme. Expressing concern over the growing incidence of HIV in various districts including Rato Dero, Bilawal censured the department’s poor performance. Rato Dero has 11 union councils where quack doctors are a common feature.

According to reports, the authorities have been given special directions for HIV screening of the people in Larkana.

Sindh Health Care Commission has been empowered to conduct crackdowns against quacks, but during the past three years, none have been conducted nor have any fake clinics been sealed. Sindh Blood Transfusion Authority and Sindh AIDS Control Programme also appear to exercise silence over the loss of human lives.

After reports of HIV in Larkana surfaced, World Health Organisation, United Nations Children’s Fund (UNICEF) and other global institutions sprung into action and took immediate measures to monitor and control the spread of the disease in the area.

In 2017, reports surfaced of unsafe blood transfusion in dialysis patients at Larkana Child Hospital after which, the health department formed an inquiry committee. However, former Sindh Blood Transfusion Authority director Dr Zahid Ansari shelved the report and since then the HIV continued spreading unchecked.

According to the Sindh AIDS Control Programme, out of the 11,068 people on whom diagnostic tests were conducted 445 were tested positive. The HIV patients comprise 356 children and 89 adults.