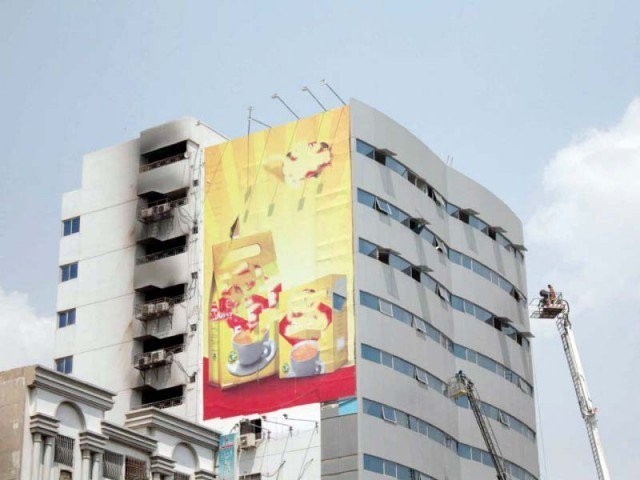 Two persons died and several others were injured after a fire broke out in the Noor Trade Centre in Karachi. The trapped persons were rescued with the help of snorkels and helicopters. PHOTO: ONLINE

CDD Senior Instructor Sadaf Zahoor led a team to conduct raids in different areas of Taxila and Rawalpindi including on Adiyala Road, Chak Jalaldin and others.

The CDD imposed fines on such 41 establishments and presented the cases before magistrates.

CDD District Officer Talib Hussain told The Express Tribune that with summers having started, the fire season had officially begun. He added that all establishments in the area have been directed to install fire safety equipment to avoid any mishap. He further said that regular inspections will be held and heavy fines will be imposed by the magistrates.

He further said that establishments not installing equipment despite warning would be sealed in the second phase of operation.

Moreover, the Rawalpindi Deputy Commissioner has put the Bomb Disposal Squad (BDS) on red alert. Two bomb disposal squad vehicles, along with two drivers and four bomb disposal experts have been directed to stay alert and ready around the clock.

The security of Ramzan bazaars has also been boosted with the deployment of 86 workers of civil defence along with the police.