In Karachi, road works in Ramazan add to citizens’ woes

In Karachi, road works in Ramazan add to citizens’ woes

Major thorou­ghfare­s have been dug up across the city, causin­g traffi­c jams
By Naeem Khanzada
Published: May 9, 2019
Tweet Email 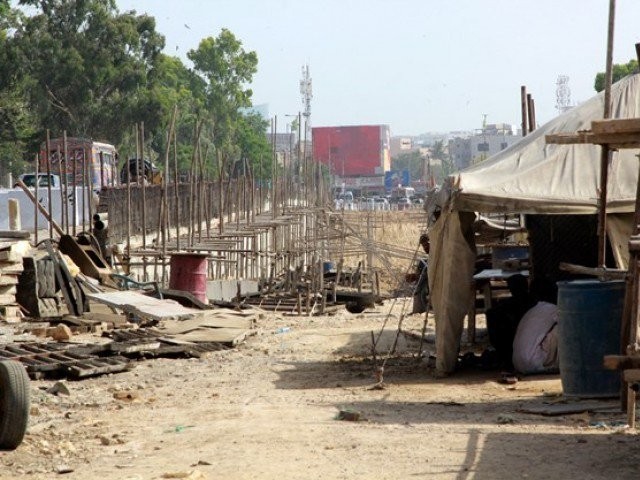 Major thoroughfares have been dug up across the city, causing traffic jams. PHOTO: FILE

KARACHI: Each year, the month of Ramazan – the holiest in the Islamic calendar – brings with it a whole new set of problems for the citizens of Karachi. There is the frequent load-shedding as the power utility struggles to cope with the extra demand for electric power as citizens try to fend off the heat. Then there are the soaring prices of essential goods, which go largely unchecked due to the lack of an effective mechanism implemented by the city administration. Added to these are the traffic jams – made worse this time by the civic agencies that have dug up several major thoroughfares as part of development schemes.

The last of these problems is the easiest to avoid. And yet, in the absence of proper planning and strategy, the citizens are left to brave hours-long traffic jams as they try to make their way home in time to break their fast.

It’s quite simple, really: don’t dig up roads right before the advent of Ramazan. Or even if you must, at least plan alternative routes to ease the citizens’ suffering.

What is even more incredulous is that the University Road, which was constructed at a cost of billions of rupees and was inaugurated amid much fanfare quite recently, has been dug up again because one utility provider forgot to install new lines. Months after the road was formally inaugurated, the K-Electric decided to install cables and dug a considerable portion of the road.

Here, the question arose as to who allowed for the road to be dug up again. Was it the Karachi Development Authority, the Karachi Metropolitan Corporation, the provincial government or the East District Municipal Corporation? According to sources who spoke to The Express Tribune on the condition of anonymity, each of the institutions played a part in ruining the road, of which at least a two-kilometre stretch has been dug up.

One of the most important thoroughfares of the city, the MA Jinnah Road, has been closed to traffic for months due to the underpass being built at the Numaish Chowrangi. This has increased the volume of traffic on its adjacent streets and link roads, which are ill-equipped to handle the pressure.

Another two underpasses are being constructed on Shaheed-e-Millat Road, due to which traffic is being diverted to the service lanes. This causes hours-long traffic jams as the service lanes are too narrow to deal with the high volume of traffic passing through.

Meanwhile, Nishtar Road has been completely dug up due to the construction of roads behind the zoo. Commuters trying to reach their destinations through the connecting roads face traffic jams on a daily basis.

Underground water lines are being laid on the road from National Stadium to New Town Chowrangi. The road will be reconstructed after the completion of this maintenance work. This is another important road in the city where two of the biggest hospitals are located.

The Korangi Industrial Area road is also being constructed and one of the tracks has been closed for traffic from Vita Chowrangi.

With around half the city’s major thoroughfares having been dug up, it is no surprise that the citizens complain of frequent traffic jams. It seems the city administration has no plan to ease their suffering either.

Verdict on prisoners’ appeals to be announced within a week: SHC CJ