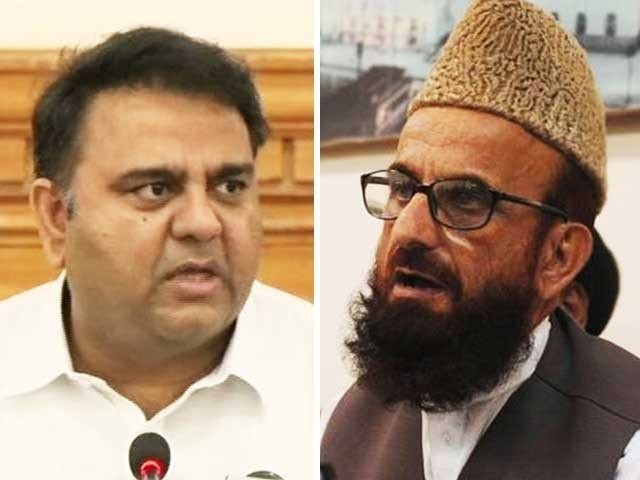 KARACHI: The Ruet-e-Hilal Committee has taken strong exception to Fawad Chaudhry’s statement about the role of religious scholars in sighting of the moon and the creation of Pakistan.

Chairman Mufti Muneebur Rehman has asked Prime Minister Imran Khan to ‘rein in’ his ministers after the federal minister for science and technology launched a verbal attack on Islamic clerics, accusing them of making lunar sighting for Islamic months a controversial affair every year as well as opposing the creation of Pakistan.

“Fawad Chaudhry’s statement against the opposition is his personal matter, but he should exercise restraint while commenting on religious scholars and not misquote history,” he said. “Who knows … one of them might also have a role in your [Fawad] appointment.”

He urged the prime minister to control his “passionate” ministers, who “lack knowledge about the system”.

On Fawad’s remarks on social media that clerics had opposed the creation of Pakistan, Mufti Muneeb said, “The history bears witness to immense sacrifices rendered by Ulema during the freedom movement. It is not appropriate to cite the role of a few Ulema only to criticise others.

Ramazan to begin from Tuesday as moon not sighted in Pakistan

“Fawad has a habit of making baseless claims to gain popularity. One must take caution while commenting on Ulema,” said the Ruet-e-Hilal committee chairman, adding that those who are not aware of the system must know that people from Suparco are also members of the moon-sighting committee.

“Our announcements regarding moon have never been wrong. Everyone bears witness when the moon is sighted. If you are fond of making a lunar calendar, then go ahead and make a calendar of 100 years instead of just 10.”

Earlier in the day, Fawad announced that a five-member committee, comprising Suparco, Met Office and science and technology ministry officials would be formed to deal with matters relating to the Islamic calendar.

The committee, he said in his tweet, would release a 10-year calendar for Eid, Muharram and Ramazan after which yearly disputes on moon sighting would come to an end.

The minister also strongly criticised clerics, saying, “The decision about how the country will be run cannot rest with the religious clergy. Pakistan would not have gained independence if Ulema were given any authority as they used to oppose the creation of Pakistan and labelled [Quaid-e-Azam] Muhammad Ali Jinnah as an apostate. The journey ahead will not be led by religious leaders but the youth. Only technology can take our country forward.”

On Sunday, a meeting of the Ruet-e-Hilal Committee had been called to sight the moon of Ramazan 1440.

It was concluded that the moon was not sighted and that the first of Ramazan would be observed on May 7 (Tuesday).

The meeting was presided over by the Ruet-e-Hilal chairman, while zonal committee meetings were called in Lahore, Quetta and Peshawar to sight the moon.