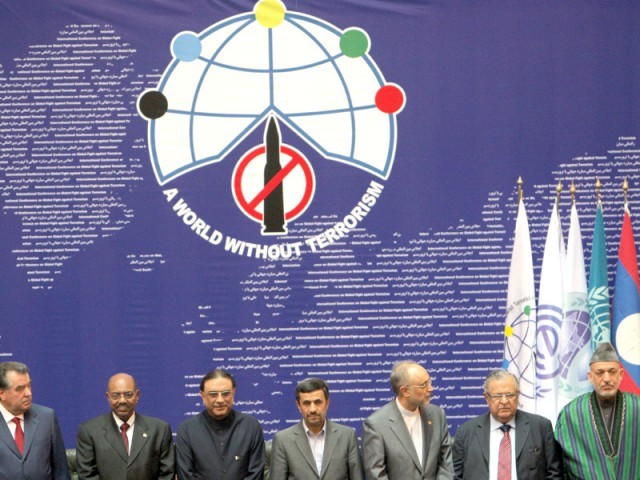 Pakistan, Afghanistan and Iran agreed to jointly fight militancy as their presidents spoke at a counter-terrorism summit that opened on Saturday in the Iranian capital.

“All sides stressed their commitment to reinforce their efforts to eradicate terrorism and militancy and reject foreign interference, all of which are in opposition to the spirit of Islam, the peaceful cultural traditions of the region and its people,” said a joint statement issued after the summit.

They also agreed to continue meeting at the ministerial level ahead of the next summit in Islamabad before the end of 2011, added the statement carried by Iran’s official IRNA news agency.

In their individual speeches at the opening session of the two-day summit, the three presidents highlighted their countries’ divergent views on a common problem.

Afghan President Hamid Karzai said that despite his government’s efforts, regional militancy was rising. “Unfortunately, despite all the achievements in the fields of education, infrastructure and reconstruction, not only has Afghanistan not yet achieved peace and security, but terrorism is expanding and threatening Afghanistan and the region more than ever,” he admitted, around the same time that a brazen suicide attack at a hospital in Afghan capital Kabul killed dozens.

President Asif Ali Zardari vowed to continue Pakistan’s fight against militancy while Taliban attackers laid siege to a police station in Dera Ismail Khan in Khyber-Pakhtunkhwa. “Terrorists violate both human and divine values by inflicting death and destruction on fellow human beings. They have no religion,” he said.

He also thanked Tehran for conferring on his wife, former prime minister Benazir Bhutto who was allegedly assassinated by Taliban militants, an award for her leading role against militancy.

But while Pakistan and Afghanistan chose to concentrate on their efforts against terrorism, Iran continued to pass the buck to the US for regional insecurity.

Iranian President Mahmoud Ahmadinejad accused the US of using the September 11, 2001 attacks as a “pretext” to send troops to the region.

“In light of the way it was approached and exploited, September 11 is very much like the Holocaust,” he said. “The American government used the attacks as a pretext to occupy two countries, and kill, injure and displace people in the region.”

Meanwhile, in a message read to the conference, also attended by leaders of Iraq, Sudan and Tajikistan, Iran’s Supreme Leader Ayatollah Ali Khamenei spoke out against what he called Western abuse of the terrorist threat. In a meeting with Karzai later, Khamenei said there will be no security if US troops remain in the region.

“The Americans seek permanent bases in Afghanistan. This is a dangerous issue because as long as American troops are present in Afghanistan, real security will not prevail,”he said.