Educat­ion minist­ry tells Senate panel that matter will be resolv­ed by next fiscal year
By Our Correspondent / Photo: Zafar Aslam
Published: May 1, 2019
Tweet Email 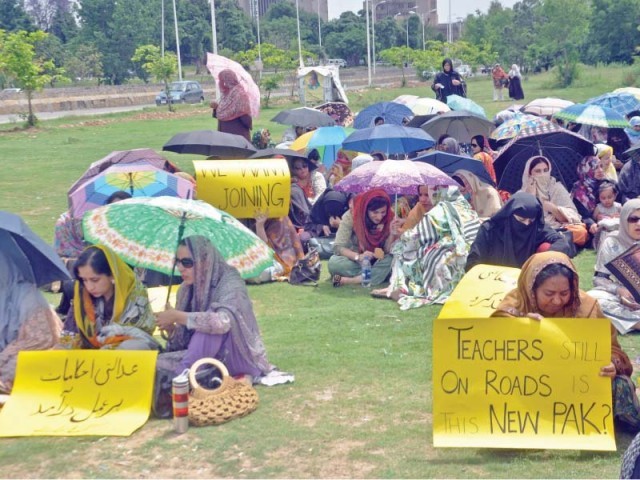 ISLAMABAD: Dozens of daily-wage contract employees of the Federal Directorate of Education (FDE) boycotted classes in the government-run education institutions of the federal capital.

The education ministry also told a Senate panel that the matter will be resolved by the end of the fiscal year.

The protesters tried to march towards D-Chowk outside the parliament but were stopped by the police and the district administration. Instead, officials assured the protesting workers of a meeting with senior officials of the education ministry.

The daily-wagers then occupied the green belt outside the National Press Club where they held up posters demanding that the orders of the Islamabad High Court (IHC) and the Supreme Court should be implemented and “teachers [are] still on [the] roads. Is this New Pakistan?”, “we want joining [letters]”.

They added that the court had ordered the government to issue posting orders within 90 days but there has been no movement from the FDE even after the passage of nine months. They said that lawmakers of Pakistan Tehreek-e-Insaf (PTI) should fulfil the promises they had made when they were in the opposition.

Later, a delegation of daily-wage employees met with FDE Joint Secretary and Director General (DG) Syed Umair Javed at the education ministry in the presence of an Islamabad assistant commissioner. The delegation was assured that the court orders will be implemented.

The protesters then dispersed after giving the government a deadline of 90 days to implement the court’s orders.

Even though teachers were stopped from protesting at D-chowk, their voices, it seems, were heard in the parliament with the Senate Standing Committee on Federal Education and Professional Training taking up the matter.

In its meeting at the Parliament Lodges on Tuesday — chaired by Senator Rahila Magsi, the Senate panel discussed the regularisation policy for contract and daily-wage teaching and non-teaching staff in Islamabad.

The committee was told that their cases were still being scrutinized. However, the claim was refuted by contractual employees.

Senator Magsi directed the education ministry to resolve the matter at the earliest and that the directives of the Supreme Court should be implemented in letter and spirit.

The education ministry assured the Committee that the matter will be resolved by June 30.

Lawmakers stated that the committee cannot be treated as a rubber stamp to approve the budget without an in-depth review.  The committee decided to hold a single agenda meeting next week to review the PSDP in greater detail. At this, Senator Nauman Wazir Khattak stated that a breakdown of the proposed budget must be submitted to the committee for review.

He further stressed the need to curb new projects and use funds to maintain educational institutions already operating in Islamabad.

While reviewing the dilapidated condition of the Islamabad Model School for Boys in Sector F-6/2, referred by Senator Muhammad Javed Abbasi, officials from the education ministry stressed that PSDP funds cannot be used for the maintenance and repair of old schools.

Senator Engineer Rukhsana Zuberi said that it was important that the process is reviewed to take things forward. She was backed by Senator Rana Maqbool Ahmed.

Committee chairperson Senator Magsi directed the education ministry to provide details of all 400 schools at the next meeting of the committee. Moreover, a sub-committee was formed under Senator Rana Maqbool Ahmed to review the matter in detail.

Taking notice of the public petition on the regularisation of contract officers from basic pay scale (BPS) grade 17 to 18 at the of National Vocational and Technical Training Commission (NAVTTC) — referred by Senate Chairman on February 21, the education ministry said that the move was authorized in the first meeting of the NAVTTC board which had been constituted on January 25, 2019.  The board had created a committee to deliberate all human resource-related issues regarding the regularisation and to come up with recommendations.

These recommendations were finalised on March 21. NAVTTC Executive Director Dr Nasir Khan told the committee that they will place all recommendations before the NAVTTAC board in its upcoming meeting on May 6.

Senator Magsi sought a compliance report at the earliest.

Higher Education Commission (HEC) Dr Tariq Banuri told the committee that HEC did not have any reservations regarding the new amendments and felt that being under the ambit of universities, endowed Area Study Centres will be more independent.

Young Doctors Association to boycott OPDs from May 2