CADD minist­er has assure­d teache­rs that he will take up the issue and will try to create new posts
By Our Correspondent
Published: January 11, 2018
Tweet Email 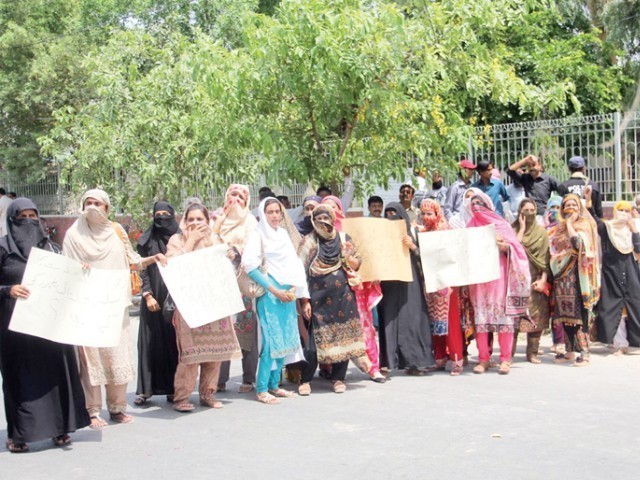 ISLAMABAD: Daily-wage staffers of the capital’s government-run schools staged a massive protest on Wednesday, demanding that the government pay their salaries, held for the past eight months.

Owing to their protest and boycott of classes, there was little academic activity at schools of the capital on Wednesday.

Teachers staged protests outside the offices of the Federal Directorate of Education (FDE) and even outside the National Press Club (NPC).

They raised slogans against Federal Minister for Capital Administration and Development Division Dr Tariq Fazal Chaudhry, accusing of trying to hire his favourites in the capital’s schools since the government had advertised to hire fresh teachers. They also demanded the release of their salaries. Pakistan Tehreek-e-Insaf (PTI) leader and MNA Asad Umar also joined the protest and extended his support to the daily-wagers.

Govt to decide fate of protesting teachers in meeting today

The Capital Administration and Development Division (CADD) minister on Wednesday directed Federal Directorate of Education (FDE) Director General Hasanat Ahmad Qureshi to prepare a summary for releasing the salaries of daily-wage staffers and for regularizing them.

Moreover, he has assured teachers that he will take up the issue with the prime minister and will try to create new posts to accommodate the daily-wage staffers.

Meanwhile, Qureshi on Wednesday said that the ongoing protest by teachers in front of the FDE office was unjustified, explaining that the directorate had nothing to do with their appointment or regularisation. “The protest in front of FDE is not justified as the matters regarding appointment and regularization of teachers fall under the federal government,” he said.

The FDE, he said, had no power to regularize the services of contractual or daily-wage teachers or to pay them. Rather, it was bound to obey and implement the directives of the federal government and court decisions.