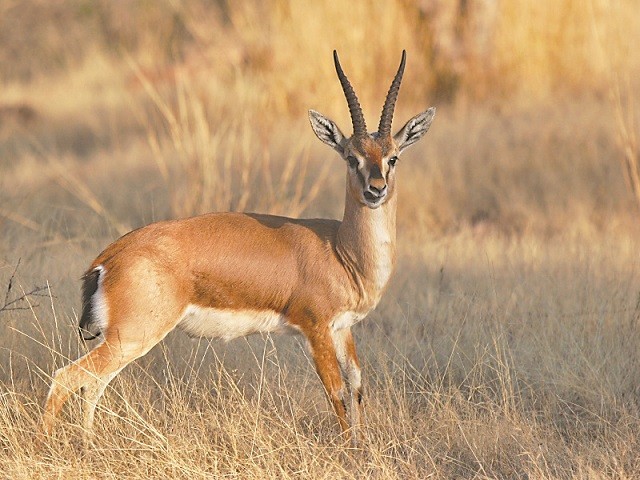 LAHORE: After implementing a ban on hunting, the Chinkara deer population at the Salt Range has seen an exponential increase. A recent survey report, released by the Punjab Parks and Wildlife Protection Department, estimates that the deer population now stands at 6,000.

While Chinkara deer are also housed in zoos and wildlife parks across the province, surplus animals are being released into the wild in order to maintain their numbers. Previously, the wildlife department had estimated that the number of deer at the Salt Range was approximately 4,000.

Speaking to Express News, Punjab Parks and Wildlife Protection Department Director Naeem Bhatti said that the number of deer had increased due to a ban on illegal hunting and measures to curb smuggling.

As a result of these steps, the deer are thriving in their natural habitat, he explained. Sources from the wildlife department stated that surplus deer from government zoos and wildlife parks were released into the wild.

“If you go to the Salt Range, the deer can spotted huddled together in groups,” he revealed. The director added that Chitral deer are also being bred in Pakistan largest artificial forest; Changa Manga. The Chitral deer is generally not found in the natural habitats of Punjab.

However, hundreds are being bred in government and private breeding centres and zoos, he said.

According to wildlife experts, Chinkara deer, which are found in Pakistan, India and Iran, are also called gazelles. They are small creatures, with an average height of 65cm, and weigh around 26 kilogrammes. Their coats are reddish brown while their stomach is usually white. Chinkara deer are found in Tharparkar, Umer Kot, Achro Thar and Cholistan.

In March 2019, the Punjab Parks and Wildlife Protection Department decided to release a large number of Chinkara deer into the wild near Salt Range. At the time, Punjab Parks and Wildlife Protection Department Honorary Game Warden Badar Munir Choudhry said that special attention is being given to sustain and encourage populations of different birds and animals across the province.

Birds and animals bordering on extinction will be released into the wild to encourage their natural populations to flourish, he said. These animals will be bred in breeding centres, he added.